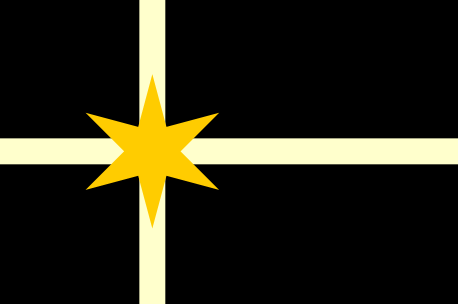 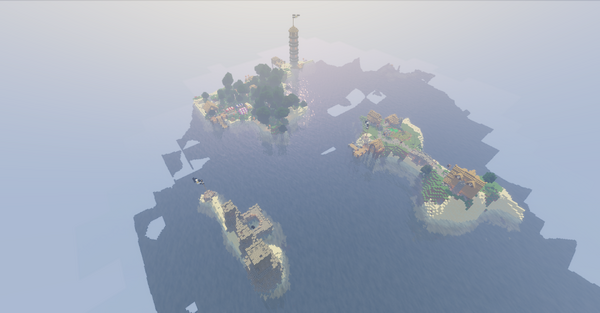 The Animus Isles, officially known as the Mandate Overseas Collectivity of the Canine, Ovine, and Galline Islands, are a triad of islands in the South Aphelian Straits under the economic control of the Dreiton Exchange Mandate and the partial military occupation of the Knights of Dreiton. Historically populated by a unique oceanic diaspora, they have been the subject of fascination to many social scholars on the Aphelian continent. Today, their futures are intertwined with those of the Dreitonese peoples, even if they are at most distant subjects of the Commonwealth of Dreiton.

The modern-day Animus Isles were once bound to the southwesternmost reaches of the Kilranian continent, becoming separated and split amongst themselves during the Great Desynchronization. Their oceanic inhabitants, small in number, became heavily concentrated on the two greener and larger islands of Sareem and Okkares and formed an economic interdependence. The loose government blossomed into a full thalassocracy, adapting to island life and integrating it as a defining aspect of its citizens' culture. Fishing, lumber farming, and subsistence agriculture came to heavily predominate the economy, leaving next to no room for developing a mining industry or a foreign trade sector.

For centuries, even as the population of the islands grew to a formidable few thousand, it remained almost completely isolated from the rest of the world. The only recorded contact with the outside world was during the Hundred Year Darkness and after, when it was visited by Dashari emissaries warning of the war on Aphelian and urging them to accept a military regiment, which they soundly refused. They were largely ignored by the Nightmare Legion due to their nonexistant geopolitical influence, saving them from certain doom.

Their culture would be challenged greatly following the end of the Aether War, the aftermath of which saw a heavy influx of settlers to the Aphelian continent. As the new people coalesced around the Free City of Dreiton and formed a national identity and a lust for power and wealth, the Dreiton Exchange Mandate sought expansion overseas. An elite team of explorers headed by a mysterious alchemist found the oceanic paradise and noted it in their logs, piquing the interest and avarice of the Mandate. They became known as the Animus Isles for their high ecological diversity, each island being named after its most predominant animal; Canine was named for its abundance of dogs, Ovine for its many flocks of sheep, and Galline for its odd number of chicken families.

Eventually, the Mandate integrated the islands into its economic sphere of influence without militarily usurping control, largely due to the strong anti-colonist sentiment possessed by the discovering team. Throughout the days of Mandate control, there has been extraordinary growth in the mining and agricultural sectors, as well as an expansion of building projects designed to stimulate the islands' economies. With this, they have become known as the Mandate's first overseas project.

For now, the Animus Isles are largely independent of the Dreitonese people, retaining much of their culture and experiencing minimal emigration. Even so, there remains apprehension as to whether the Mandate will continue to respect the sovereignty of the islands, given that those in favor of its independence back in the mainland are aging and shrinking in number.

The largest, greenest, and most populated of the Animus Isles, as well as the territory's capital. It is composed mostly of stunning beaches and a large, hilly forest. Its fertile soil lends itself easily to the growth of crops such as wheat and carrots, and its deep caves have become a hotspot for mining in the straits. Fauna on the island is diverse, ranging from sheep and cows to its highly sought-after endemic dog breeds, the last of which have given the island its name. It hosts the largest naval docks of all three islands, and is therefore its foremost trade and financial center.

During the islands' long isolated period, Sareem's role was largely similar, serving as the cultural and agricultural center of the islands. It was host to a number of cooperative farmers' guilds that provided much of the sustenance needed by the islands. One can also not think of Sareem without mentioning its expansive fishing sector; indeed, it is the foremost hobby of most inhabitants and the colorful, meaty Animus fish are now exotic delicacies throughout much of the developed world. Its education system, focused more on the manual trades than its counterpart in Okkares, focused strongly on literacy nontheless and helped maintain a strong record of Animus history before its adsorption to the Dreitonese political sphere.

Following the arrival of the Mandate, the island has greatly diversified its economy, strengthening incrementally in agriculture, fishing, and lumber but booming exponentially in mining and metallurgy. Most notable is its new influx of tourists, which has greatly enriched the island and spread the fabled images of its landscapes throughout the world. Housing development has also increased while environmental sanctity is cautiously maintained. Most importantly, Sareem, now known as Canine Isle to foreign peoples, serves as an economic and political stronghold of the Dreitonese commonwealth, being both a stopping point for visitors to and from and Dreiton and a springboard for further colonial exploration. Even so, the presence of foreign militaries is relegated mostly to a tiny commonwealth force supplemented by a cadre of Mandate paramilitary men, and focuses almost entirely on helping local authorities with law enforcement.

Notable Mandate achievements on the island have been the greening of the once-desertified Canine Springs, the expansion of existing residences in the hilly Canine Park, and the construction of the popular Lux Canina lighthouse as a symbol of cultural and economic empowerment. However, the oceanics' attitudes to the Mandate are not universally warm, and the island is somewhat of a hotbed of anti-Mandate sentiment not seen in the more complacent Ovine Isle. The island has begun a trend toward self-sufficiency, largely mastering the trades introduced to them by the Aphelian people. This, combined with their intrinsic age-old knowledge of the land, has cast uncertainty over prospects of continued Mandate influence. For the time being, the island is the proverbial jewel of the Dreitonese colonial realm.

Unlike Canine and Ovine, Galline Island was never permanently inhabited by humans. It is by far the smallest of the three Animus Islands, and is often rather considered to be a large sandbar than an actual island. Very little vegetation grows on Galline, except for occasional patches of seed-bearing brush and wild grass. The only fauna present on the island are a rare and unique species of chicken (from whence the island gains its name) who sustain themselves on the scant vegetation and as a result have proliferated over the years.

Prior to the arrival of the Dreitonian explorers, very few attempts were made by the natives of the Animus Islands or any other peoples to settle Galline Island. Any attempts at settlement quickly failed due to the inability to cultivate crops in the island's dry, sandy soil. There is evidence, however, of hunters from both Canine and Ovine making the short voyage to Galline to regularly slaughter a number of the wild chickens for their meat, eggs, and decorative feathers. To the people of Ovine especially, cooked chicken is considered a prized dish reserved for special occasions and religious ceremonies. At times the feathers collected from Galline have been used as a general currency and status symbol by the people of both islands.

As with the other two, Galline Island has seen rapid development since the arrival of the Mandate. It is likely that Galline was the first island upon which the Dreitonian explorers landed before continuing on to Canine and Ovine, as of the three islands, Galline is the one closest to Dreiton itself. Whilst Canine and Ovine were almost immediately recognised by the Mandate for their economic potential, no such promise was seen in the desolate sandbar located to their north. The leader of the Mandate's expedition, a mysterious alchemist tasked with expanding Dreiton's global influence by overseeing its fledgling colonial programme, did recognise some worth in Galline - namely military worth. Because of the island's length and presence at the head of both Canine's and Ovine's harbours, Galline serves as a natural barrier for the other two islands, and has a wide commanding view over much of the South Aphelian Straits. Though the Exchange Mandate does indeed possess its own small military company, it does not operate in any official state capacity, so the alchemist decided against giving the Mandate military control of Galline. Fortunately for him, another man in his company, a wizened mercenary captain and explorer, was a member of the Knights of Dreiton, the sacred warrior brotherhood tasked with defending the Dreitonian Commonwealth and all its interests. The alchemist granted the island to the mercenary captain, tasking him with fortifying it in the name of the Knights and Dreiton.

Today the naval citadel of Seaforth dominates Galline Island and much of the Animus skyline, and serves as the primary bastion of defence for all three islands. The fortress consists of three large towers and a small fortified dockyard. From the fortress, naval patrols around the Animus Islands and the wider South Aphelian Straits are common. It is the largest overseas military fortification belonging to the Free City of Dreiton, as well as its unofficial naval headquarters. It was constructed and is still controlled by the Knights of Dreiton, making it one of their three bases of operation. The appointed commandant of Seaforth, granted the title of 'Sea Lord', is considered the second highest ranking individual in the knightly brotherhood, only behind the Lord Commander himself. During the construction of the fortress, the island's native wild chicken population numbers sharply decreased until only a dwindling few survived. Due to recent conservation efforts, however, chickens once again roam freely around the island in large numbers, and natives from Canine and Ovine are once again permitted to sail to Galline to hunt them.

Retrieved from "https://potcoplayers.fandom.com/wiki/Animus_Isles?oldid=757842"
Community content is available under CC-BY-SA unless otherwise noted.