Basil Livenburg is a living hiding on Undead Island. He traveled with his relative William the 3rd to Undead Island the same day Jolly re-populated the island. A special dagger that was passed on from all his family members, now to him was stolen by an Undead Buccaneer. If you help him get his prized possession back, he will give you a rusty key he found. They key, even though rusty, unlocks a secret cave where Undead EITC and Navy are hiding. Inside that cave, is a room, a gold room, storing all of the EITC and Navy's gold. If you find that, it is rumored you will be a hero, known by all pirates. 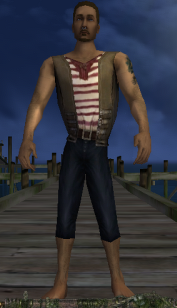