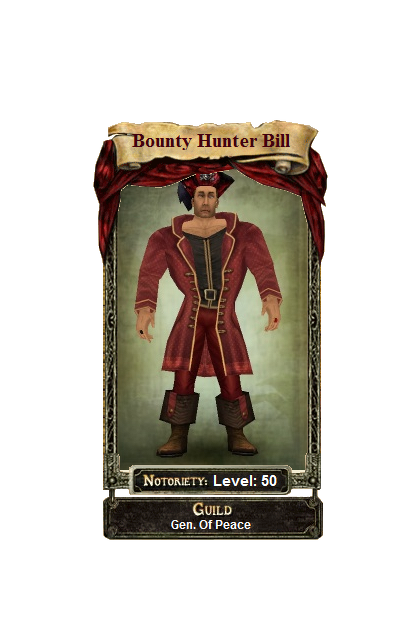 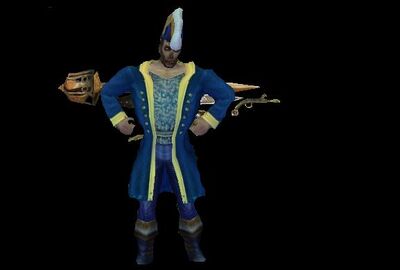 Life as a Pirate

The name's Bounty Hunter Bill, but you can call me Hunter. I belong to the Gen. of Peace guild, a guild that has seen The Light. I am notoriety level 50, I am maxed out on sword, shooting, voodoo doll, and dagger, I am well on my way to maxing out my other weapons, and I am not so ahead in grenades.

It all started when he was born into a family who were members of the royal guard. He was trained in the way of the sword, he was given his first gun when he was 15, and ever since, he was a great child and an amazing boy.

Thats when the worst happened. He had gotten into a fight with someone when he was 17 and killed him. He was sentenced to 3 years in jail. After his sentence was done, his parents sent him into the military to teach him a lesson in behavior, punishment, and discipline. He had broken out of the military at night, and he was a free man. He had gotten a boat with the money he saved up and he sailed to Tortuga. Sadly, his ship was blown up before he got to Tortuga, but he survived. After the ship had been sunk, he swam for shore.

How I Became a Pirate

We asked that hunter write this part himself. This way you can learn the MOST accurate information. He has also wrote the rest of the page himself. He hopes it's not a problem for you.

When I was on Tortuga, I was very poor. I had barely any money, and I had little food and water.

Now a man on the run from the law, I had nowhere to go. Nobody in Tortuga would accept me into their homes. I thought for sure that I would die out on the streets

That's when I met Red, guild master of the Generals of Peace. I became his friend and I asked if I could join Red's guild. So I joined the generals of peace and I had a fun time in the guild.

Sadly, after a while, Red quit and left, so the guild was disbanded. Red's friend, Lawrence Daggerpaine, was going to make another guild to substitute Red's guild, that way the guild could live long and prosper.

Then, after a few years had gone by, I decided to visit my parents and introduce my new guild to my mom and dad. However, when I got there, my parents had been shot. I saw that there was a note that said, "Dear Bounty Hunter Bill, you are nothing compared to me. Your parents were against me, and I had to do something. I decided to kill your parents because anybody who stood against me would die. Try as you might though, you'll never be able to defeat me! MUAHAHAHAHAHAHAHAHA"

Signed, P.W. After that note, I vowed revenge. My revenge would have to wait though. What I didn't know was that pear son was already dead, but however, he made a new pirate, and I didn't know what the pirates name was, so I gave up my search for revenge.

After a while, I met Esmerelda, a pirate who needed a boyfriend. Me friend Bess Firebones said she had a friend who just broke up and needed someone to help her out through the tough times. Naturally, as a TRUE gentleman, I offered to help her. After a while I asked Esmerelda if she wanted to be my girlfriend, and she said yes.

But then....... the unspeakable happened.

I was gone for a month and Esmerelda left me. She started to date my friend Bill Plunderbones, but I'm over that now.

As my pirate life went on, I did INCREDIBLE feats. I singlehandedly killed neban the silent, I singlehandedly soloed general Darkhart. (or as I like to call him: General Darkfart). I fought and won in MULTIPLE invasions, and I even won against a treasure fleet. I mastered shooting and cutlass, along with voodoo doll and dagger, and I am well on my way to mastering the others. I say, life can't get any better.

My life is ALL about piracy. I am against the black guard and the navy, I am COMPLETELY against captain Ezekiel Rott and his crew, not to mention the person he works for, which is Jolly Roger. My motto is: "Hunting is like fishing. You have to find out where your prey lives, and then you have to set the traps. Then, just wait and see what happens." I am an AMAZING pirate, I am a TRUE pirate to the end, and I am well on my way to pirate mastery.

If you would like to visit the Legendary Hunter, I will be on cortevos server in Padres Del Fuego.

You can find me in the blacksmith shop by the tavern in the docks of Padres. I can accept friend requests so that's good for you to know. Some of my friends are Lawrence Daggerpaine, Bill Plunderbones, and Jack Warskull. Just remember, I am head of security in the guild so if you wanna join, you are gonna have to pass a few tests first. I am a NPC on Peace Island and have a part in the Peace Island Quest.

P.S. I can totally be a great help to you if you need someone with power.