Cactice ​is a popular professional and amateur sport in Aquila. Widely regarded as one of the most dangerous and therefore enjoyed pastimes in the world, Cactice is instantly recognizable by its circular arena usually made of ice (artificially packed or otherwise) and its treacherous outer edges, which are traditionally lined with prickly cacti, though these are rarely substituted with other traps such as lava pits or even hungry animals.

Cactice is a very versatile game that has seen many innovations and is often subject to on-the-fly changes due to the nature of the sport. However, the official Medriaas Colosseum Library has designated a brief set of official rules for the game.

Many centuries prior to the Kilran War, the Kingdom of Medriaas reigned as the dominant power both in its home continent of Occa and the world. Its significant population and revolutionary medicinal practices allowed it the ability to raise a mighty ground army, recent scientific advancements made charting simpler, and its rich merchants used their primitive carracks to spread the nation's influence throughout the known world and beyond.

However, as the Kingdom prospered, its people longed for a fresh distraction from the trivialities of their normal lives; as the standard of living rose, Medriaan citizens spent less and less time fighting for survival and more time sitting at home, raising families, and paying taxes. The people of the prosperous port town of Providence, the capital of Medriaas, had grown tired of ice fishing and snowball fighting.

Simultaneously, brave Medriaan conquerors, explorers, and common merchants began to explore the very edges of charted Aquila, venturing far from the main continent into realms unknown; one flotilla of ships was finally sent by the King himself to investigate rumors of a strange land called the Eternal Furnace, purported to be filled with untold riches and extravagant natural wonders.

Months after the expedition began, the flotilla finally reached the sandy shores of a new continent unlike any they had seen; the ground was sand, yellow and orange far as the eye could see, with desolate stretches of dune-filled deserts and marvelous mesas that stretched into the Aether. Moreover, the continent was absolutely filled with strange green, prickly plants, and green, prickly people as well!

The explorers were arrested and brought before the one they called the Sultan, ruler of the Atacam Empire. Unimpressed by what the puny humans had to offer, the Sultan ordered them imprisoned with the intention of executing them via lava pit in the coming days for all the Atacam people to see. The expedition was saved, however, by a young and entrepreneurial Atacam citizen who spoke Aquilan and called himself Cactus Jack.

Cactus Jack recognized the explorers as Occans and explained that people of their kind had been to Atacam in the past seeking fame and fortune, but most were killed by the Sultan or simply starved in the desert. Jack offered to free the expedition and grant them passage back to their home (with fame and fortune to boot) on the one condition that they bring him back to Medriaas as well, as he longed to see the world beyond the Atacam wastes. The expedition agreed.

The Atacam man showed them how to harvest cacti, which he explained were pod-like growths in the sand that would one day grow into Atacams. While some of the explorers objected to harvesting unborn Atacam people for profit, their leader was more than happy to harvest several stacks of cacti, load them on an Atacam ship, and make a speedy return home to Medriaas with Cactus Jack in tow.

The expedition returned home to Aquila as heroes, and all involved became quite rich off their discovery of the cactus, which proved very quickly to be a massively invasive species that immediately desertified a significant portion of Aquila. Nonetheless, the world was also enamored with Cactus Jack, who toured all Aquila for several years as a sideshow attraction. Though he was rich and led a prosperous life, he longed to be more than a freak show and soon enough set about finding other sources of income.

From his residence in Providence, Jack began building the very first arena for a brand new game which he called Cactice; using tough Occan ice and many of the plentiful cacti, he soon constructed a primitive form of the game using swords and armor. Not attracting much attention initially, he later innovated the game by employing the use of sticks made of Atacam wood, refined from cactus spines and renowned in Ataca for its springy properties. One good hit from an Atacam stick could send the unfortunate victim flying, though the weapons were otherwise mostly harmless.

The new Cactice was an instant hit in Providence, with several arenas being constructed in the growing city alone before the game rapidly spread throughout the entire Kingdom. Word of the game spread to all corners of Aquila, and the merchants of Occa became wildy rich off their exports of cacti and ice, even further improving the wealth of the kingdom.

Cactus Jack, who in time became known as Cactice Jack due to his association with the game, was also renowned as the undisputed champion of the game. He offered a challenge to all who thought themselves worthy: beat Cactice Jack in a fair game of Cactice, and the victor would inherit his vast mercantile empire. 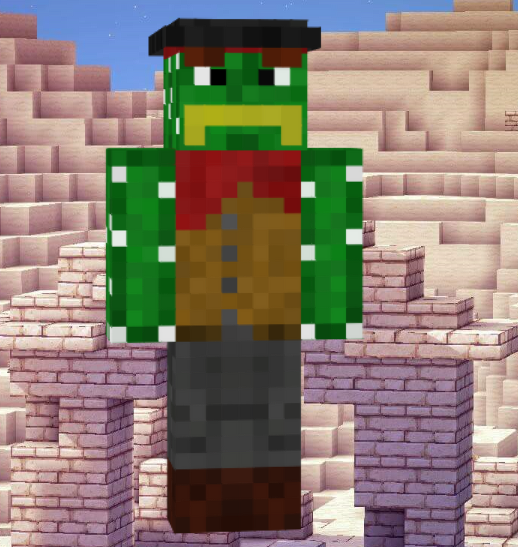