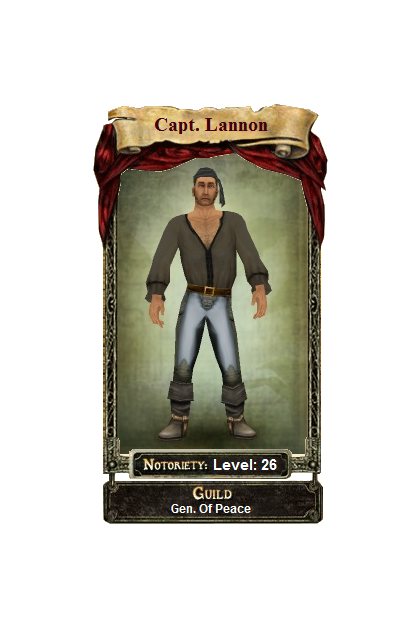 This is the history of Captain Lannon Windshadow. From his birth and early life to now.

Lannon's parents were born in London and were very rich. But then they went Bankrupt and were broke. They then saw a sign about Spanish controlled Texas; the Spanish were offering good money and farm/ranch land, so they moved to Texas. And on Oct.27, 1715 they had a son and named him Lannon Floin. Not much is known of his childhood except as he got older he started to get a southern accent. His parents did not like it, so they sent him back to England to join the Royal Navy. So the 16 year old boy got on the next boat to England with nothing but the clothes on his back, a few personal items, and his fiddle (which he played very well).

Lannon joined the British Royal Navy at the age of 17. He rose up to a Corporal and he was under the command of Lt. Harmen. Lannon was a good soldier, he was very obedient, always followed orders, and fought hard. He was skilled with a sword and gun. He fought in many skirmishes against the Spanish, which quickly made him very respected. Although he was picked on for his accent, he loved the Navy. After reading how good he was in the Navy, your probably wondering why he was only a Corporal, right? The answer: Lt. Harmen. Harmen was Lannon's commanding officer. Harmen was strict but fair, which earned him great respect. But he was some what jealous of Lannon, but nobody knows why. That's probably the reason for him not promoting Lannon. In one skirmish with the Spanish, Lannon saved Harmen's life, that's the reason he was promoted from a private to a corporal.

One day, Harmen wanted to steal an EITC wagon train, he wanted the whole squad in on it. But Lannon (now 25) and his friend Cpl. Sanders, didn't want any part in it. So the English Lieutenant and the rest of the squad stole the wagons and planted the evidence on Lannon and his friend. Lt. Harmen was ordered to capture the two, but they fought back. In the end, Harmen shot Sanders in the head and threw Lannon in jail. But he threw him in the same jail as, none-other-than, Captain Jack Sparrow. After Lannon escaped, he vowed revenge on Harmen and the rest of his squad for what they did to him. More about that in my book: "The Adventures of Capt. Lannon: The Hunt for Lt. Harmen" coming soon.

When Lannon was in jail he was unconscious, but woke up to, Captain Jack Sparrow staring at him. They broke out of the jail and Lannon ran to the Old Warehouse, where he got his sword. He ran outside to find Jolly Roger's men, or skeletons, destroying the town. He fought some off and made it to Captain Bo Beck. Lannon, knowing how to use a cannon, sunk a skeleton War Frigate. But Jolly Roger in the flesh, or in the bones, teleported to the Grim Reaper, and turned poor Bo Beck into a skeleton. But Jolly let him live so he could tell Jack that Jolly was coming for him. So Lannon swam to Port Royal, as The Harkway sunk the little sloop.

Wanted and on the Run

Lannon arrived on the beaches of Port Royal, Jamaica. He talked to Tia Dalma and got a compass. He then killed every Navy soldier out side of the Governor's Mansion, out of rage for what they did to him. He found the release orders for the Black Pearl and got the Governor's seal. So on top of being a wanted man, he now had release orders for the Pearl, so he went to the docks to escape. He then got his first ship, but he doesn't remember the name of it due to him just waking up and getting out jail, and swimming for miles. He set sail on the light sloop with a small crew (the crew were not real players, just made up). He made is way to Devil's Anvil and got his pistol. He then continued to Tortgua.

This is a list for things he was/still is wanted for:

Before the day in jail:

-The theft of an EITC wagon train (wrongly accused)

After The Jail Break:

-The theft of an EITC wagon train

-Breaking out of jail prior to hanging

-Theft of release orders for the Black Pearl

To keep suspicion down, he changed his name to Windshadow.

Lannon sailed to Tortgua, where he met, once again, Captain Jack Sparrow, and his first mate, Gibbs. He proved his worthiness and went on his way. Lannon just got out of the Faithful Bride, when he saw a stray dog. It was a big, strong, beautiful German Shepherd. He went up and started petting him. Lannon said to him,"Looks like where both outcasts, huh?" And the dog answered him with a bark. Lannon decided to keep him and name him Loyal. Lannon was unemployed, broke, no longer lonely, mad, scared, and tired. So he and Loyal slept under some balcony as it started to rain. Lannon went plundering with his crew for sometime, trying to get money. One day he was invited to a guild called the Chitik Union. He then trained to become a Pirate Marine. He made many friends which included: the famous Sugar, Bill Plunderbones, Kat, Rose Sharkwrecker, Bill's wife at the time, Emerald, Mark Goldskull, and many others. He had sold his Light Sloop for a Light Galleon, the Iron Executioner.(He later bought two more: The Wave Runner and the Sea Defender) Lannon then bought a house (Millie's Cottage) and lived there for a couple years.

On day Lannon was training with his Drill Instructor, or DI, Chris Firesword (or something like that) when his friends Sugar, Kim, and Bill teleported to him and there was a huge argument. Lannon (now a Sergeant) tried to stop the fight, Chris shot Kim! Sugar told Lannon and Bill to arrest the traitor but he got away. They all four teleported to Doc Grog's and they tried to fix him. After they fixed him up they went to the Tortgua jail and told the traitor to teleport, he did. The four told him he was under arrest but he pulled out his sword and started to fight Lannon and his friend, Bill Plunderbones. But the traitor shot Kim, and Lannon, and stabed Bill! After the fight all three guys were on the floor. Sugar quickly fixed up Bill and Kim. But Lannon was hurt the worst. Sugar yelled out,"Jail house operation!!" Because they couldn't get Lannon to Doc Grog in time for him to save him. So Sugar fixed him up after awhile, but the traitor was only seen once after that event, but then never seen again.

Life as a Marine

Lannon loved being a Pirate Marine for the Union. One day him, Sugar and Kim, took over a Co. Empire server. That battle gave him a promotion to a sergeant, and a Medal of Honor. Lannon was in command of a small army of about 500 or so. Each of his ships had 30 men on them, but they weren't military. He had been in many skirmishes with the Navy and EITC. Lannon was also a very obedient Marine and always followed orders, he would always pull out his gun if someone was threatening his generals.

(Note: This is made up to you, but a true story for me and others xD)

One day Lannon was away on missions against the Spanish with his ships, the Iron Executioner and the Sea Defender. The Wave Runner (One of Lannon's favorites) stayed at Tortgua. But one day the crew saw EITC ships. They belonged to Captain sadcamp. The crew docked in Tortgua by the main dock and sat up cannons on the beach and got more men ready. As the battle went on, the remaining twenty-seven men used back to their ship because of the enemy over running them. So they started to fire on the advising EITC and sadcamp's pirates. But sad himself was there on his ship and sank the Wave Runner. The remaining men fought and died on the beaches. Lannon's house, Millie's Cottage, was destroyed and Millie was shot dead, but she still took down seven EITC soldiers thanks to Lannon teaching her and her husband, Henry, to use a sword. When Lannon found this news out, he was devastated. He had lost his home, his things, and thirty-one of his best friends.

After the Union fell, Lannon entered a guild called the Gen. Of Peace. There he became friends with the legendary, famous, and awesome, Lawrence Daggerpaine. But with all this good stuff there's always something bad. When he got back from his missions, he found out that one of his best friends, Sugar, was hung; along with his house being burnt down, but now thirty-two of is friends were dead. But then more good news: he made whole new friends, like Law, and Bess Firebones. But with even better good news comes worse news...

Quite recently, Lannon and the whole Gen. Of Peace Military, was Honorably Discharged from the G.O.P Marines. Lannon was very sad... even with the high honors and the boxes of medals. He was the rank of Captain and was the G.O.P's Head of Military.

Lannon's favorite thing to do is mess with Bill Plunderbones by killing and eating his pet gators. Since he is not a Marine anymore; he owns is own tavern (King's Arm, Cortevos Server), and also works at Daggerpaine Industries. He lives on Driftwood Island, Cortevos Server. He loves messing with Law and Bill by hitting them with his wok.

Getting back the Leviathan

Lannon's main weapon is his War Broadsword, The Peace Breaker. These are its stats:

Marine's Revenge: Passive power that makes the user, and all allies around him 75% stronger

Marine's Charge: A charge that increases the speed and striking attacks of allied soldiers

Deflection: Power that enables the user to block a bullet, and make it hit someone/thing else

Quick Draw: Passive Power that allows user to quickly draw pistols or any other gun that is on their person

Buck Shot: Can also be used as a shotgun

Throw: Allows Lannon to throw one of the Tomahawks

A little About Lannon

Lannon is a very nice and loyal guy. He has anyone's back no matter what and will always protect his leaders (just ask anyone in the Gen. of Peace Guild). Lannon loves rum, but his supply is gone, save for a few bottles and one and a half kegs. Another thing that people love about Lannon, especially his company and crew, is Lannon's not one bit racist. He treats everyone as equal as possible and will punish anyone on his ship's crew, or in his company of Marines.

Lannon has many ships these are all of his ships, there class, armament, crew, and current condition:

On Lannon's weapon belt he has The Peace Breaker on his left hip, a double-barreled pistol on his right, an ax just above The Peace Breaker, a Bowie Knife across his tale bone, his wok and musket strapped to his back, a backpack filled with weapons and ammo, and an ankle holster on both legs, the left holds a small dagger and the right holds a small pistol.