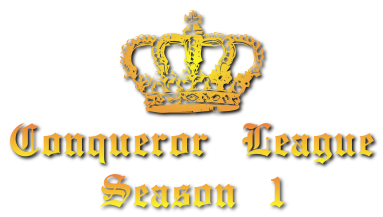 The Current Season, is Season 1.

As established by multiple users in accordance with the League commissioner, the official scoring guide (with the type of game and maximum alloting points for winning) are as follows:

Playoffs: How they work in the Conqueror leagueEdit

In the playoffs, Forfeitting is not an option.

Final Game: 2 players will play. The only way to win is to eliminate your opponent entirely. If the Overseer is not in the game, said Overseer will will have the same responsibilities as above

As per the need to have team matches in the league, some users have decided to establish permanent teams in hopes of clinching more victories. They are as follows:

Retrieved from "https://potcoplayers.fandom.com/wiki/Conqueror_League?oldid=736497"
Community content is available under CC-BY-SA unless otherwise noted.