Dark Palace is a palace in the Catacombs. It was first seen and now owned by Captain Shadow Sail.

It is a series of secret passageways inside the walls and grounds of the Catacombs. Some of the areas are filled with lava. It is very secretive and only some know how to get in. Some may say it is the "Insides of the Catacombs". 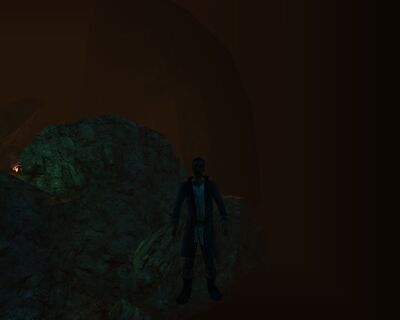 Shadow, being the Governor of Padres, was just checking over everything, to make sure everything was... up to order, fitting his likings. He was in the Catacombs, making sure, well, that the enemies weren't killing any visitors, let's just say that. It was a normal, sunny day. Shadow was walking, walking, and, daydreaming. THUD! Next thing Shadow knew he had fallen, but, half of his body was off the land and on an abyss. But it was floating! Shadow was in a way, freaked out. He threw a rock out onto the abyss, floated. He told an EITC Guy to walk over there. They thought he was nuts. Then Shadow told him to do it, next thing they knew, there was a floating man O_O. And thus, the Dark Palace was born. To this day, this area is Shadow's special area. ﻿

Some special people, such as, King John Breasly II of England and Shadow also practices magic with Jolly Roger, here. Shadow has made a pact with Jolly to not... well... kill people. People can only do that with Shadow's permission or else, Jolly will just stand there, that evil look on his face.

Retrieved from "https://potcoplayers.fandom.com/wiki/Dark_Palace?oldid=753862"
Community content is available under CC-BY-SA unless otherwise noted.