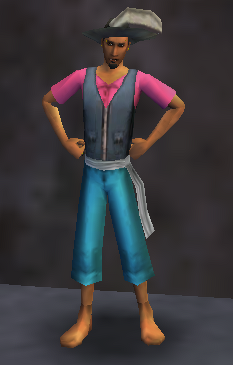 Don Roberto De Muerte aka Robert Shipstealer Jr. or the Godfather is an Undead Pirate that was brought back to life by Robert Shipstealer aka his father. He was the first born son of Persia but died at the age of 22 in the Battle of the Bloody Gulf in Persia. He's real name was Robert Shipstealer Jr. When he died, Persia had a huge funeral that involved the Royal Family of Persia. When he died Robert Macmonger the second son became the heir to the throne of Persia. Even though Robert had an heir to Persia, Roberto was the favored son to the throne. So as years passed Robert found the witchdoctor that cursed Jolly Roger. He aggreed to revive Roberto to life as long as when he's grown the witchdoctor would become Shah of Persia! Robert aggreed to those terms but a plan to kill the witchdoctor. Then when Roberto was revived Robert stabbed the witchdoctor in the heart! As the witchdoctor gave his last breath he cursed Robert's revived son to be undead forever. The witchdoctor escaped and Roberto became Don Roberto de Muerte an undead Persian prince!

After this happened Roberto awoke and saw himself alive again. He turned to his his father and said" father what happened" when this occurred Roberto blacked out. Robert was in shock that his first son was finally alive. He picked up Roberto and they headed back for Persia. Once there Robert was kinda afraid of what happened though. His son has returned but as the undead. Also in his mind he was thinking if his second son or the heir to Persia should still be heir. But at this point Robert said that he'll deal with that matter when they return to Persia. While this was happening Roberto was dreaming... He dreamt about the Battle of the Bloody Gulf. He remebered the warriors that fought along side him. Then Roberto awoke in Persia! In Persia, Roberto found out that his mother died during the Battle of the Bloody Gulf. Also he found that his father brought him back to life. Sadlt at a cost. Roberto was now undead! When Roberto found out he had another brother and that his uncle after the battle became the new Sultan of the Ottoman Empire, Roberto felt overwehlemed that he's been gone for so long that he hardly remebers Persia. So Roberto says that he's going to travel to Europe for a while. So he leaves Persia to go find himself.

In Europe Roberto found a place he very much liked, Italy. In Italy it was beautiful and didn't seem to have any thing that reminded him of home. Then Roberto met Don Caruso, a mafia leader that persudaded Roberto to join the mob in Italy. Roberto was in that mob for 5 years when Don Caruso died. He was killed in a mob fight. Caruso's dieing wish that Roberto become the mob leader.