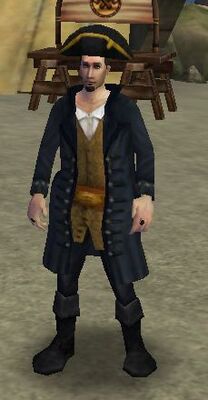 Admiral Hat - Very expensive hat that many great and powerful leaders of the EITC wear. Comes from England made from the finest leather and golden ring around the hat.

Adventure Coat - Made from the finest silk and leather buttons that England can buy. Died with a special black die that could only be found from England.

Adventure Breeches - Fine English leather, very expensive and very comfortable. Died with a special black die that could only be found from England.

Adventure Boots - Real Indian leather that is super expensive and only imported from the EITC ship of the line war ships.

Fine Silk Shirt - This shirt is made from the finest silk from India. Expensive but EITC are given to for free. Others may have to pay though.

Embelished Vest - Tradational for the EITC to have something to make sure the EITC have their own logo. It comes in different colors and more commonly white.

Gold Skull Belt - So those breeches don't fall and it's made from purest gold coming from India. Special Thanks to the EITC.

This is to show your wealth. This is worn by great EITC leaders and the jacket is made of pure gold and silk that comes from far away places.

Admiral Breeches - Made from beautiful blue silk ,comes﻿ from far away lands.

Blue Fur Top Boots - Boots that have golden studs on the top to show that you come from wealth and not from a poor history.

Embelished Vest - Golden in this picture to show that you have enough money to make your vest golden.

Silk Shirt - Beautiful shirt of the finest silk that the EITC can buy. Rumored to have golden buttons in side shirt 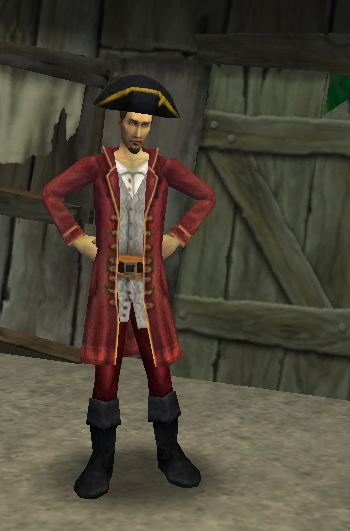 Festival Breeches - Very stylish and expensive too to get this silk from the finest silk from England.

Silk Shirt - Formal, official and makes sure that you look amazing

Adventure Boots- Died black and when kicking somebody off your ship

This outfit is the official outfit for Royal Navy members!

Retrieved from "https://potcoplayers.fandom.com/wiki/EITC_Catalog?oldid=704523"
Community content is available under CC-BY-SA unless otherwise noted.