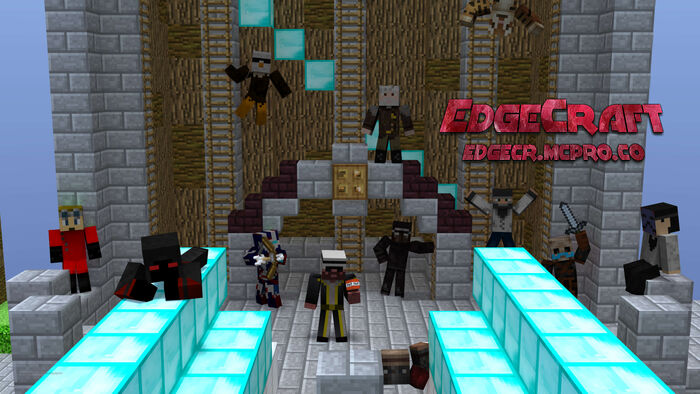 EdgeCraft was a Minecraft server by Captain Ned Edgewalker that opened on Thursday, December 3, 2015. The server was not a continuation of the NeddehCraft server series, as Ned has decided he wants that to be continued at another time.

The server never found the amount of success that previous NeddehCraft servers did, and closed after months of trying to make things work on February 14, 2016.

Ned is the former owner/operator of both NeddehCraft & NeddehCraft 2.0. Ned wanted to formally break away from the NeddehCraft formula for sometime and to create something new.

EdgeCraft opened on December 3, 2015. On opening day, EdgeCraft was very similar to both incarnations of NeddehCraft. The server was quickly losing interest, and in desperation, Ned announced that the Solar Apocalypse Plugin would be added after 2 days on the server. This quickly sparked interest among users.

On December 5, the Solar Apocalypse plugin was added to EdgeCraft. The plugin was recieved very well by players & admins. The spawn area had to be edited to keep it safe during the day and at night. Admins have to change the time consistently to make sure the desired times are met. If the times remained un-edited by admins, players found that each day/night/dawn/dusk cycle would last too long.

On December 15, after a week or so of stagnant activity on the server, Ned announced that the server was being completely redone.

On December 16, Ned decided to move forward with an idea to change the server map every Saturday & Sunday to an adventure map of some sort. This was done after it was found that Citadel wouldn't work on EdgeCraft. Every week there will be a new adventure map that will launch at 12:00 PM PST and last however long it takes to complete it, before switching back to the survival world. The first map launched on December 19, and it was the Cubeception. Following that, there was planned to be a weekly poll run similarily to Quote of the Week, except it will be filled with adventure maps for wikians to play. Maps can be re-nominated an infinite amount of times until they win, in which case they will be barred from entry again. Ned later changed this, instead deciding that nearly every nomination would be put in the "to be played" list.

On January 5, 2016, Ned announced yet another server-changing addition to the server, which was the addition of EdgeCraft Nations to the server. EdgeCraft Nations was an ongoing attempt to revitalize the failed Minecraft Nations/Empires formula, although it's being done differently from the two servers. Users will roleplay as a nation of their choosing (fake or real) and participate in war, diplomatic relations, trading & more. A full list of countries is listed below. After a short time, the idea was scrapped & EdgeCraft was put into yet another planning stage.

On January 17, 2016, after multiple attempts at making the server successful, Ned had run out of ideas. DAVESDAVY proposed an idea to add RPG elements into the game, along with some minigames among other things. Seeing as how DAVESDAVY had much more experience in hosting minecraft servers & making minigames for servers, Ned gave him console access & officially named DAVESDAVY to be the third & final member of the EdgeCraft staff.

On February 14, after months of trying to make the server a success, Ned officially closed the server.