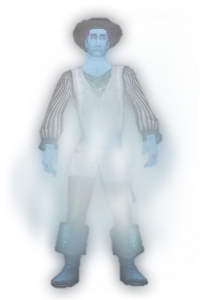 Simon Redskull was a citzen of Raven's Cove before the attack by the EITC and Jolly Roger's forces. He worked as an engineer at the Daggerpaine Industries branch on Raven's Cove. He was tortured to death by Jolly Roger when he refused to build a Ram to open the door to the mines. Now he roams the abandoned Daggerpaine Industries Workshop, helping any lost souls on their journey to the Mines. He will give pirates an Optional Quest to do during the Raven's Cove Story Quest (see below). This quest will give them the power to summon him in the El Patron Boss Battle. You will have this option until you use it in the Boss Battle.

Simon showed pirates around the island when they first discovered it, protecting them against Rage Ghosts and the aftereffects of Jolly Roger's attack. He guided them around the island with his fellow citizens. He would explain his story and show them the Daggerpaine Industries Workshop as well as his progress on the weapon; reminding pirates that he offered a quest during the Story Quest.

You can gain a bonus Revenant Cannon Ram if you help Simon Collect some parts for his "Secret" Weapon.

After you complete the quest above, you will be awarded a gun like no other. Once you trash the gun, the only way to get it back is to ask Simon for an extremely challenging quest to earn it again. 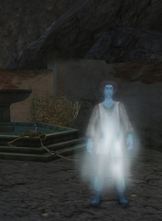 Simon outside the Workshop

Simon after an Invasion 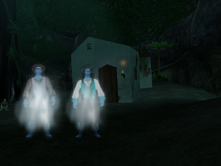 Simon with his colleague Lawrence Daggerpaine 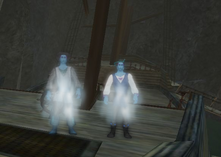 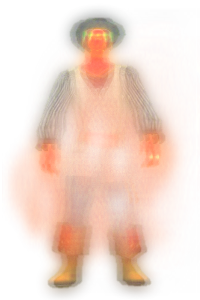 When Jolly Roger's forces draw near to Raven's Cove once more. he tranforms into a rage ghost instantly vaporising the Undead!

Retrieved from "https://potcoplayers.fandom.com/wiki/Fan_GM:Simon_Redskull(Ghost)?oldid=706084"
Community content is available under CC-BY-SA unless otherwise noted.