This fort was created when Johnny was continuing to attempt to conquer the Barbary Coast in 1744. He managed to take it over in 1745, but it was built before his conquest of Barbary. He added the fort so that Spanish forces couldn't get it from such a short route. It's named after the town it's located on. This town is Tangier, which is a fairly violent town because of so many Spaniards who migrated there. They are known to harass the townspeople, but using the fort, the pirates of Barbary have kept many Spaniards away from all of Africa and simply kept them on the coastlines. They have cleaned up Tangier for the last couple months and rid it of Spaniards and other hostile foreigners including people from Portugal.

If you look at the photo gallery below, you will see the many features of the castle-like hexagon. One hundred pound cannons cover the whole perimeter. Also, the moat is only 2–4 feet deep, and Barbary soldiers with muskets can usually wade through there and fire at any invaders without the enemies seeing them. These soldiers are nicknamed "swamp gators" because they can pass by unseen in that greenish water. They'd wade through the water wearing light green jackets and brown tricorns which appear as coconuts that might've floated into the shallow moat. There are also Barbary soldiers in dingies with two small turret-cannons attached to them. This is used to attack small enemy ships. Even on top of the walls people are firing cannons and rifles. In the middle of the fort is a marching ground where most of the soldiers get their weapons and some even train in there. A lot of soldiers actually live in the fort a short period of time in the six towers which are full of bunkers on each vertex of the fort. 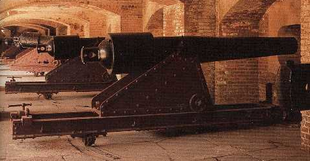 The one hundred pound cannons inside the fort. 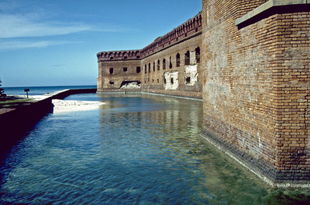 A side-close up view of the fort. 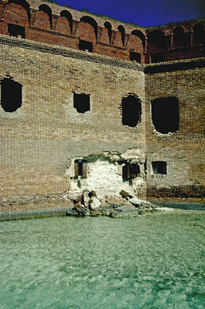 A crumbling in the wall where the "swamp gators" come in through. 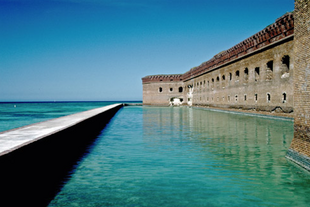 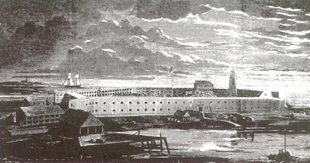 A black and white painting of it from another angle.
Community content is available under CC-BY-SA unless otherwise noted.