George was a skeleton for Jolly Roger before a Pirate killed him. So he was in The Tortuga Graveyard for years And never came out..... till 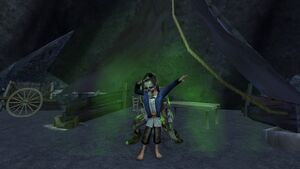 a Pirate gave him a Potion that would not just make him normal, but a Pirate! George felt weird as a Pirate. He did not know how to use Dolls Or Staffs. Tia Dalma hated him, she never had a liking to him but Elizabeth Swann gave him alot of his weapons, mostly swords but, still that was nice for him. He never liked skeletons, So he would defeat them until he came to his Father. He was dared to Or Calypso would curse him. He did not feel good. He once was a boss named General Darkhart but was defeated by 20 Pirates in a flash second he always Stayed up never slept And then finally he Was a mastered Pirate