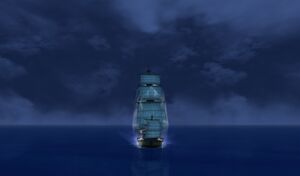 The almighty Jeremiah Stormwash, and his crew of the Sun Chariot set out every morning to bring up the sun and chase away the Rage Ghosts. With the power of this great ship of the line, they sink all ships opposing their way, even if it's a pirate ship. These pirates are more mighty than any others. Scarier to face than Davy Jones' crew, maybe even Jones himself. These pirates have faced the Flying Dutchman. But they are not afraid to face her again! So let Jones and his crew know, to always keep the cannons loaded, because one day, this mighty crew will rise above him and take his place to rightfully ferry dead soles across the seas!

This crew of brave buccaneer's include!