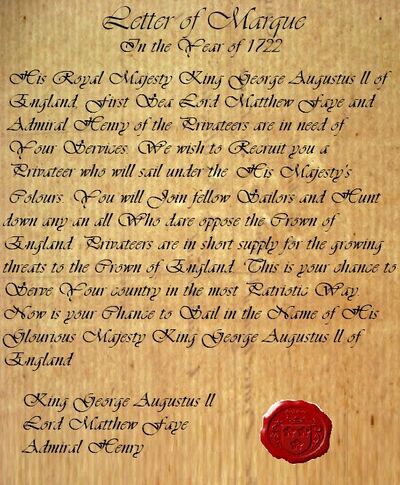 A Letter of Marque and Reprisal, commonly known as a Letter of Marque, was a warrant or commission from a national government usually authorising a designated agent to search, seize, or destroy specified assets or personnel belonging to a party which has committed some offence under the laws of that nation.

Captain Hector Barbossa~ 1749 to hire him as Grand Admiral of his Majesty's Navy. later resigned in 1750

Capt. Skull X~ 1722 to hire him as a General of the Royal British Military, later resigned

Slappy~ 1744 to hire him as an English Privateer

Samuel Redbeard—Used to make sure he cannot be tried. Signed by the King and Lord Beckett

Kitty Logan - Given pardon in 1788 when her past crimes were waved after she saved the King of France from death from an assassin.

Retrieved from "https://potcoplayers.fandom.com/wiki/Letters_of_Marque?oldid=755253"
Community content is available under CC-BY-SA unless otherwise noted.