The Maestro Staff was a powerful voodoo staff wielded by the nefarious Finn Hamm. Unique in appearance and function, it was crafted by Hamm himself under the tutelage of Tia Dalma. It was rarely used in combat, serving more utilitarian purposes such as divination and the commencement of arcane rituals. 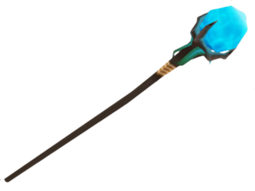