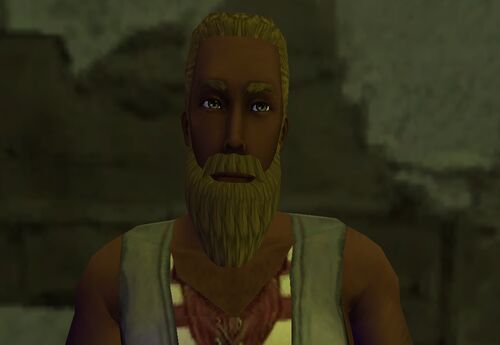 Maximus is an NPC located in The Outlands. He is based off of Maximus, one of the pirates of Nults McKagan.

Maximus was originally one of the many slaves involved in the Atlantic slave trade. When being shipped to the Caribbean, the vessel he was aboard was raided by the crew of The Black Warrior, led by Richard Cannonwalker. He and all of the other slaves aboard the ship were liberated and taken to mainland, where they could pursue their own destinies. However, instead of leaving and doing things on his own, Maximus requested to join the crew. Richard accepted and Maximus was officially a crewmate aboard the Black Warrior.

When Richard died on September 19, 1746, Maximus was unsure of where he would venture next. He decided to join up with Marcus Featherstonehaugh, one of his crewmates, and go to the Outlands. He has resided there since.

These are quotes that Maximus says when he doesn't have a quest for you:

Retrieved from "https://potcoplayers.fandom.com/wiki/Maximus_(NPC)?oldid=705102"
Community content is available under CC-BY-SA unless otherwise noted.