Militia of Fuego is currently led by Elizabeth Sunrage and has 35 members. The Guild is presumed to be inactive.

(while negotiating for war rights) "Ok ok! We will help you win the war, now who are we fighting again?" "If you need me I'll be winning now be a good boy and lemme shoot ya"

Need a few extra men to fight for you cause? Need a few sailors for Spain or France? Well then just contact us on the server monada. We are there 24/7 and will fight FOR YOUR CAUSE no matter who you are, free of charge

Join today with this code

- |info = In the Grand Army against Captain Leon}}

We have joined the United Freedom Confederacy with Edgar Wildrat in a council seat.

Wildwoods: Wildwoods is a wilderness out post that promotes study of Nature and wildlife, as well as curses and magic and charms and potions. It is the center of the militia's magic areas. Jay Brightsun controls the study and oversee's the training magic groups.

Monada is the militia capitol. The server is under there control

El Suduron Bootcamp is the location where Recruits are trained. The main training base is Kingshead (retreated from Kingshead) recruits get ready in El Suduron

As of April First 2011 Rat's Nest has been conquered by Militia of Fuego. All residence has either been killed or arrested, this is the location where the guild has occasional meetings. 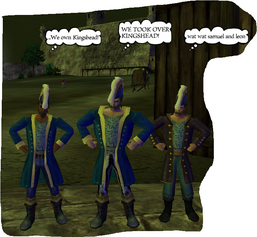 We took over Kingshead but then retreated. 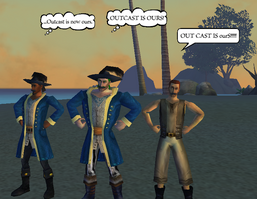 OUTCAST IS OURS!
Add a photo to this gallery

Wildrat kills Vets in one shot

The Guild fights off invasion on home server

Retrieved from "https://potcoplayers.fandom.com/wiki/Militia_Of_Fuego?oldid=745754"
Community content is available under CC-BY-SA unless otherwise noted.