Nearly two years players have waited for the "Kraken" today I learned that it was all a scam to get players to buy unlimited well across all the Pirates Online wikis and forums.We must unite to make disney ."Release the Kraken".Together we can make this happen. 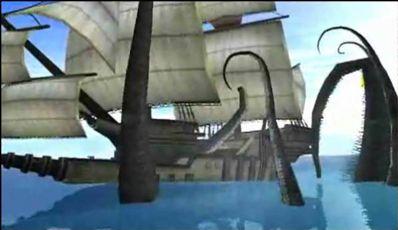 John macbatten- we want it!

Too long we have waited for a true challenge. TOO LONG!!! Disney is distracting us with scrappy updates. They think we forgot. Guess what, WE DIDN'T! GIVE US THE KRAKEN!

i like new things on the game, giant squid is pretty cool. please add it to the game - El Conquistador 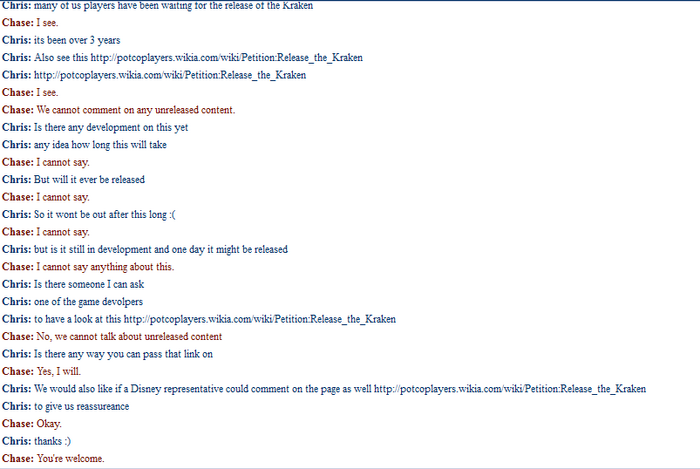 Release the Kraken Disney or else ]:).

Curycoo: I have some questions today about promised game content

Curycoo: So. I have been with the game a long time, and back in '08, the Kraken was promised.

Curycoo: Recently, i have been reading up on this, and one Person hadscreens of a live chat where a Rep said that the kraken was only a scam to get people to buy unlimited access.

Chris: I am sorry you think that.

Curycoo: No, i'm not sure i believe it.

Curycoo: I just want to know about that.

Chris: Know about what?

Curycoo: If what that chat said is true

Chris: If it currently is not in the game we do not discuses it.

Curycoo: That is a link to where some players have been talking about the kraken

Chris: That is not coming from us.

Chris: I know a lot of Pirates would enjoy new content.

Curycoo: Do you have any news whatsoever about when The kraken might be released?

Chris: But, since this is live chat and we only help with technical isses please contact memberservices@piratesonline.com

Curycoo: Thank you for your time Chris!