Pirate Torrture was a pirate guild under the leadership of Richard Cannonwalker. The exact dates of its existence are unknown, although it's generally understood that the guild was created in late 2007 and ended sometime in mid-2008. The guild's name was misspelled unintentionally due to ignorance on Richard's part.

Pirate Torrture was created sometime in late 2007 when Richard Cannonwalker had a falling out with his first and current Guildmaster at the time, Chris Goldbellows. Due to this, Richard left the guild and got unlimited access. Then, Richard made the new guild alongside another one of Goldbellows's former guild members and soon-to-be first mate, Stefan.

Recruitment and Rise to Power

Not long after, the guild began building. Friends that would accompany Richard in many of his adventures to come, including Cannonskull and Jon. Eventually, the guild maxed. All the while, Richard was such a low level that he had a guild-sanctioned celebration for getting his grenades.

One day, Richard got online to see two people online. He decided (very foolishly) that he no longer wanted to be a part of the guild. Since the option of passing Guildmastership down wasn't installed in the game yet, the guild was left without any leadership and promptly died.

No limitations were ever set on who could join. Since the game was almost brand new, many people were guildless, leading to the guild easily maxing in membership to 500. There was a balance of people in each rank.

It's unknown whether or not Pirate Torrture ever reached the leaderboards, although it's very possible due to their large size. 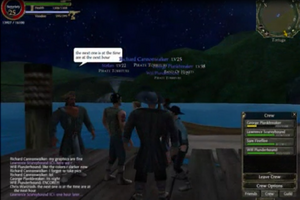 Retrieved from "https://potcoplayers.fandom.com/wiki/Pirate_Torrture?oldid=707616"
Community content is available under CC-BY-SA unless otherwise noted.