Quest available to any level pirate only in October

Sleepy Mollow is in a crisis! Evil ghosts of all sorts are attempting to seize control of the town, then Port Royal, then the entire Caribbean! Speak to NPC John Breasly and he will offer you a hefty ammount of gold if you can save Port Royal! 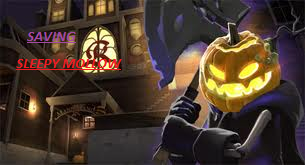 "I take it your the mercenary I've been asking for? Excellent. I have a special request for you today, mercenary. Recently, the small town not far from here by the name of Sleepy Mollow was attacked by a horde of evil spirits. I need your help to take back Sleepy Mollow, before it is too late. If you successfully take back Sleepy Mollow from the spirits, you will be rewarded handsomely with gold.

Thank goodness, your here. Sleepy Mollow is infested with evil ghosts, claiming they will take over Port Royal, then the entire world! What's that noise? Oh no! They know you're here! Please good sir, do your duty as a hired mercenary and drive those ghosts from the tavern!

They're gone! You've driven them away from the tavern! However, this doesn't mean they give up. More will come, much more powerful than the others. Hmm, you should go to Commander Rutherfort in Fort Bligh. He'll know what to do.

"No one is allowed to be up here. Wait, you were sent the King? Hmm, these orders are indeed real. Very well then. Your first task is to recover the plans to take back Sleepy Mollow from the ghosts. Find them, and bring them back."

Defeat 15 ghosts of any kind

Recover plans from a barrel

"Do you have the plans? Excellent. Now, let us discuss these plans in the war room....

"First, we attack here, then charge there, and rally there, then finish there. Got it?"

Defeat 75 ghosts of any kind

Thick fog rolls in. You hear the running of a horse. The rider reveals himself, the Headless Pirate.

Headless Pirate: Griminstro, you have failed me once again.

Griminstro: Please, master, there were too many of them! And this pirate, he was too powerful... there was something strange about him-

The Headless Pirate slays Griminstro, then turns to you.

Headless Pirate: Pirate, I advise you leave this island and never come back. Do not make a mistake by siding with these weaklings.

He then rides into the distance.

Chapter 3: Wrath of the Headless Pirate

"I trust we have driven them back? Excellent! They are nearly defeated. What's that? Griminstro is not their true leader? How could this be? And, if he's not the true leader, then who is? Wait, did you say... HEADLESS PIRATE? He was destroyed years ago by the spirit priests! We must take action! Pirate, you are obviously capable. Your next task is to hunt down and banish the Headless Pirate, driving him from Sleepy Mollow for good. Wait a minute... what the..."

A horde of ghosts charge towards Fort Bligh, destroying the gate and attacking soldiers

Rutherfort: Go go go! Stop them! Don't let them past!

Defend Fort Bligh for 5 minutes without being defeated

"Phew, that was close! Thank you for the assistance, mercenary. Now, we must strike back! Reports say that the ghosts are hiding out in the church. Please, sir, go there, and end the last of them. The fate of the Caribbean rests in your hands, pirate!"

Navigate through the Hall Puzzle

Defeat all ghosts in the room

You see the Headless Pirate sitting on a stool playing the oragan. He stops and onstows his blade.

Headless Pirate: Finally, you've arrived. I was afraid my army was too much for you. Unfortunately for you, this is where your trail ends. Unstow your weapon, and face me, like a man.

The Headless Pirate is covered with red mist. He drops his sword and falls to his knees.

The Headless Pirate falls into the portal to the afterlife. All of his ghost soldiers vanish.

The pirate travels back to John Breasly's palace. The King thanks the pirate, and hands him a chest full of gold.

The Return of the Headless Pirate 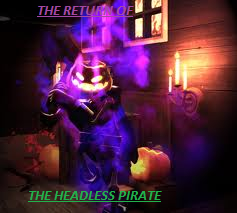 Retrieved from "https://potcoplayers.fandom.com/wiki/Quest:_Saving_Sleepy_Mollow?oldid=551303"
Community content is available under CC-BY-SA unless otherwise noted.