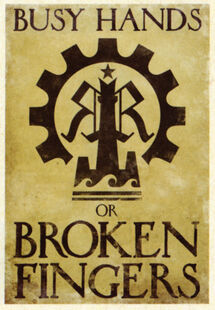 Reaver Industries was founded in 1746 by Reaver Venables, who having retired the army set about building a company which would become hopefully a huge manufactoring company making ships and weapons and also spreading British Influence all over the World with their unique and expensive products!

Reaver Industries is famous for the young age of many of their workers, The young are brought in from orphanages and the streets and so feed in exchange for their labour, most children die at a very young age or those few that make it to adolesence, are soon shot for trying to run away from the factories.

Reaver Industries controls a large amount of the arms industry to the British Royal Guard, exclusive only to the highest of bidders, Reaver Weapons are the best weapons in all of Britain, They also sell and Manufacture Arms and Ammunition to Sweden and Romania as well as Switzerland and Morocco.

Reaver industries main exports and trade from the caribbean come in the form of tobacco, tea, sugar and rum, also a huge export is slaves which are transported to London! There main offices are in Port Royal, Kingshead, and Padres Del Fuego.

Reaver decided to hand out rewards for the "best" of workers, if you wish to know more about these "rewards"watch the video provided!

Reaver Industries is pround to announce that they will be doing their bit in the War effort against Russia and providing arms and ammunition to Great Britain as well as fifty new "Reaver" class Frigates!

Also one Third of all Reaver Employees have automaticly been enlisted into the army!

Now go on! Do your duty! for King and Country we shall prevail, remember i'm still giving out prizes!

Retrieved from "https://potcoplayers.fandom.com/wiki/Reaver_Industries?oldid=707787"
Community content is available under CC-BY-SA unless otherwise noted.