The Empire of Russia (Императорский России; Imperatorskiy Rossii), is a country in northern Eurasia. With the largest empire in the world, Russia is a respected world power with a unique culture and society.

The Tsardom of Russia's leadership is a constitutional monarchy, in which the emperor (tsar) exercises supreme power. Emperor Vladimir I is the current monarch of Russia. Occasionally, his reign is accompanied by a regent, namely Grand Duke Richard of Moscow. The Prime Minister of Russia, who has limited power beneath the Tsars, and heads the Emperor's Council of Ministers, is Kazimir Yaromirovich Kovlovsky.

Tsar Peter I's son, Vladimir, soon arose to the throne in 1744. Following his temporary abdication the following year the throne passed to his eldest son, the tsetsarevich Ivan VI, who in turn was forced to abdicate in favour of Emperor Gavriel I, a distant cousin. Following Gavriel's assassination in early 1746, Vladimir I once again reclaimed the throne and continues to rule as emperor.

The Russian Empire straddles both the Asian and European continents, split roughly 75% and 25% in each continent, respectively. Stretching from the eastern extent of the Baltic Sea in the west to the Northern Pacific Ocean in the Far East, and from the Caspian Sea in the south to the Arctic Ocean in the north, Russia covers more than one-eighth of world's land area.

At 23,700,000 square kilometres (9,150,000 square miles), the Russian Empire is the largest empire in the world. As such, it encompasses a wide range of ecosystems and biomes. While the western extremities of the empire are not uncharacteristic of the rest of Europe, the central and eastern Siberian steppes consist of both vast prairies and heavily wooded forests. The Ural Mountains, stretching down the spine of Russia's European-Asian division, and the Caucasus Mountains, occupying the area between the Black and Caspian Seas, make up the tallest mountains in the world. The Western Kazakh-Ciscaucasusian area, as well as the Ukrainian steppes (both within the southwest of the empire), are considered the empire's "breadbasket" for their arable land fed by the Volga, Don, and Dnieper Rivers; these areas account for more than half of the empire's agricultural production. The extreme north of Siberia, the Siberian islands, and the North American colony of Alaska, mostly dominated by tundra and permafrost, are by and large uninhabitable.

The Russian Empire is subdivided into eighteen gubernii (губернии), or governorates. Each is operated under the jurisdiction of a royally-appointed governor, as well as a local council of boyars. The eighteen governorates are listed below:

In addition to the eighteen imperial governorates, the Russian Empire also lays claim to three additional provinces, all of which are noncontiguous with the empire: the Grand Duchy of Serbia, a Balkan state inherited in 1744 by the Romanov crown (capital Belgrade); the island of Cyprus, purchased from the Ottoman Empire and host to Russia's first Mediterranean fleet (capital Limassol); and the Alaskan-Yukon territories of North America, mostly trapping and whaling colonies first established in 1743 (capital: Novoarkhangelsk).

The Russian Empire is officially an absolute monarchy with divine rule by the emperor, though, since the 1744 – 1748 reforms fulfilled by Emperor Vladimir, there has been a great deal of additional power and influence granted to local councils and nobles (Boyari), the Imperial Senate (Duma), and the Emperor's Council of Ministers. Acting in the spirit of pre-Petrine tradition, the emperor in 1747 granted split local authority between the regional boyars and the imperially-appointed governors.

The State Duma (Госудаственная Дума; Gosudastvennaya Duma), also commonly referred to as the Imperial Senate (Имперский Сенат; Imperskiy Senat) is the foremost governing legislative body within the empire. It is a unicameral body currently composed of 36 senators (сенаторы; senator'y), two from each governorate. The senators are elected by local councils composed of emancipated serfs, and are approved by regional land-owning nobles. The senate is headed by an elected procurator general (генеральный прокурор; general'nyy prokuror), who serves as a liaison between the senate and the emperor. The current Procurator General is Lev Simyonivich Rogazhin.

The State Duma was conceived as the successor to the mediaeval legislative system known as the Boyar Duma, by Peter the Great, first convening under his authority in 1712. Since then there has been a healthy split between the emperor and the senate, as the latter has enjoyed a relatively substantial amount of authority, particularly during the reign of the current emperor. Even still, all actions completed and laws passed by the State Duma are, legally speaking, only advisory in nature, as all final decisions rest solely with the emperor.

The State Duma convenes annually (or, rarely, upon request by the emperor) in the Tauride Palace, St Petersburg.

Map of the Russian EmpireEdit 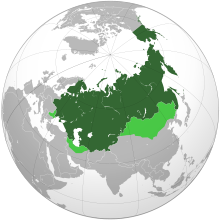 The Russian Empire (c. 1745). Dark green: conquered land. Light green: Invaded but under dispute
Add a photo to this gallery

The following acquisitions all occurred under Emperor Gabriel I

The following acquisitions occurred under Emperor Vladimir I

In the late 12th century, land in the east, mostly inhabited by the Islamic Tatar tribes, fell under command of the Golden Horde, the portion of the Mongol Empire led by Temujin "Genghis" Khan. As the Mongol Empire expanded, the Golden Horde's influence, under different leaders, eventually crossed the Ural Mountains (acting as a boundary between Europe and Asia) and gained a hold on the governing city-states in the west. By the 1300s, nearly all of Russia had fallen into Mongolian-Tatar control.

During the 15th century, the Russian city-states lay in harsh turmoil. In 1547, however, Tsar Ivan IV (the "Terrible") led a revolt on the oppressive Mongols, and eventually freed western Russia from their rule. The same year, Ivan IV united all the freed Russian city-states, and declared himself first Tsar (Caesar) of "all the Russias". During his long reign (1547-1584) Ivan IV nearly doubled the already expanding Russian Tsardom, established a strong central government (including the a parliamentarian figure, the Russian Imperial Court), and established the Russian capital in the Moscovy Rus, now called Moscow.

However, Russia's progress soon declined due to a line of weak rulers, and continuing wars with Poland-Lithuania, Sweden, the Crimean Khanate (a final incarnation of the Golden Horde), the Byzantine Empire, Persia, and the Ottoman Empire respectively. However, by the mid 1600s, Tsar Mikhail I came to power in Russia, and began a lasting dynasty known as the Romanov rule. Under the Romanov leaders, Russia conquered foes such as the Ottoman Empire and Persia, increased its size further, and improved the military with the addition of the Cossacks, noble yet zealous warriors hailing from the Ukrainian steppes. During this time, Russia also gained control of most of Ukraine (in addition to Kiev), after the Russo-Polish War.

By the close of the 17th century, Russia had emerged as a world power, yet seemed isolated from the rest of the western world. In 1682, Tsar Peter I "the Great" came to power in the Tsardom of Russia. Under his rule, Russia would not only accomplish significant victories against Sweden and Poland-Lithuania in the Great Northern War, but would also be launched into a "cultural revolution". Under Peter the Great, art, literature, architecture, science, and music flourished in Russia, awarding them membership into the western world. Perhaps Peter I's greatest achievement, though, was the construction of St. Petersburg on the Baltic Sea in 1723. The city, the site of a captured Swedish fort, not only became the new Russian capital, but also a world mecca of culture, earning it the nickname the "Venice of the East".

Following the sudden death of Emperor Venyamin I, a brief period of civil war engulfed the nation. However, Venyamin's confidant and fellow Englishman Andrew Mallace soon rose victorious and reigned briefly as Andrei I. Upon his return to Britain, the throne passed first to his cousin Mikhail Volkov, and then to Venyamin's brother (and son of Peter the Great) Vladimir Romanov. The two reigned dually as Mikhail II and Vladimir I, but after the former's sudden abdication, Vladimir reigned alone for two years. Then, in 1746, the emperor's son and heir to the throne, Ivan Vladimirovich Romanov, staged an illegal invasion of Prussia and later rebelled against his father. Vladimir relinquished power to his son and fled to Sweden, where he was offered asylum. Subsequently, Russia was invaded by a coalition of Prussian, Austrian, and British forces, and Ivan VI was forced to abdicate in favour of the distantly-related Qing Emperor of China Gabriel I. Following his mysterious assassination later that year, Vladimir I at last returned to Russia and regained his throne, restoring peace and order. 1746 is thus called the "Year of Three Emperors". Vladimir I has continued to reign alone ever since, though his son Ivan has been pardoned for his rebellion and has resumed his title of crown prince.

The current Russian currency is the Ruble (also spelled Rouble). The current Russian average network income and growth revenue (as of 1750) is estimated at 5.2 billion Rubles (112 million British Schillings), making Russia the second richest nation in the world, only behind Great Britain.

Retrieved from "https://potcoplayers.fandom.com/wiki/Russian_Empire?oldid=749675"
Community content is available under CC-BY-SA unless otherwise noted.