The Empire of Russia (Императорский царизма в России), or the Diarchic Sovereignty of the Holy Russian Empire (Олигархические суверенитете Святой Русской империи) is a country in northern Eurasia. With the largest empire in the world, Russia is a respected world power with a unique culture and society.

Currently, the Tsardom of Russia's leadership is a diarchical oligarchy. Emperor Gabriel Vagin I has full authority over all of Russia. The Tsarevich is yet to be decided. The Prime Minister of Russia, which has limited power beneath the Tsars, is (unknown yet :3) .

The Empire of Russia

Map of the Russian Empire 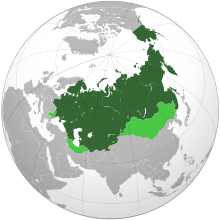 The Russian Empire (c. 1745). Dark green: conquered land. Light green: Invaded but under dispute
Add a photo to this gallery

The following acquisitions all occurred under Emperor Gabriel Vagin I

In the late 12th century, land in the east, mostly inhabitated by the Islamic Tatar tribes, fell under command of the Golden Horde, the portion of the Mongol Empire led by Temujin "Genghis" Khan. As the Mongol Empire expanded, the Golden Horde's influence, under different leaders, eventually crossed the Ural Mountains (acting as a boundary between Europe and Asia) and gained a hold on the governing city-states in the west. By the 1300s, nearly all of Russia had fallen into Mongolian-Tatar control.

Rise of the Tsar

During the 15th century, the Russian city-states lay in harsh turmoil. In 1547, however, Tsar Ivan IV (the "Terrible") led a revolt on the oppresive Mongols, and eventually freed western Russia from their rule. The same year, Ivan IV united all the freed Russian city-states, and declared himself first Tsar (Caesar) of "all the Russias". During his long reign (1547-1584) Ivan IV nearly doubled the already expanding Russian Tsardom, established a strong central government (including the a parliamentarian figure, the Russian Imperial Court), and established the Russian capital in the Moscovy Rus, now called Moscow.

However, Russia's progress soon declinded due to a line of weak rulers, and continuing wars with Poland-Lithuania, Sweden, the Crimean Khanate (a final incarnation of the Golden Horde), the Byzantine Empire, Persia, and the Ottoman Empire respectively. However, by the mid 1600s, Tsar Mikhail I came to power in Russia, and began a lasting dynasty known as the Romanov rule. Under the Romanov leaders, Russia conquered foes such as the Ottoman Empire and Persia, increased its size further, and improved the military with the addition of the Cossacks, noble yet zealous warriors hailing from the Ukrainian steppes. During this time, Russia also gained control of most of Ukraine (in addition to Kiev), after the Russo-Polish War.

By the close of the 17th century, Russia had emerged as a world power, yet seemed isolated from the rest of the western world. In 1682, Tsar Peter I "the Great" came to power in the Tsardom of Russia. Under his rule, Russia would not only accomplish significant victories against Sweden and Poland-Lithuania in the Great Northern War, but would also be launched into a "cultural revolution". Under Peter the Great, art, literature, architecture, science, and music fluorished in Russia, awarding them membership into the western world. Perhaps Peter I's greatest achievement, though, was the construction of St. Petersburg on the Baltic Sea in 1723. The city, the site of a captured Swedish fort, not only became the new Russian capital, but also a world mecca of culture, earning it the nickname the "Venice of the East".

In 1745, after the resignation of Tsar Andrei I, Tsar Mikhail II, the true heir to the throne, took over. Only days after his rule, though, he handed power over to a close friend and native Briton Vladimir I. However, after a breakdown by Tsar Vladimir I due to high pressure by numerous nations, he handed the throne down to his son, Tsar Ivan VIII. Later Tsar VIII invited former Tsar Venyamin I to hold the throne with him. Russia is now a diarchy.

Below are the thirty largest cities (by population) within the Russian Empire. Poland, Belorus, and Lithuania are included, while Prussia and protectorates in Finland and Portugal are excluded.

All populations obtained from 1745 census.

Like nations such as Great Britain, France, and Spain, Russia is a combined-government type of a kingdom (monarchy) and an empire. In 1721, Peter the Great had converted the Tsardom of Russia into the Empire of Russia. However, rather than take on the title of "Emperor", all Russian rulers since have kept the title of "Tsar".

Russia's kingdomship is officially an enlightened diarchy, in which almost all power is limited to the two tsars. However, a portion of the power belongs to the Russian Imperial Court, a parliamentarian group of politicians who are responsible for setting laws, proposing new ideas (to be approved by the tsars), and handling foreign relations. In addition, each member of the Imperial Court specializes in a certain field (e.g., the Minister of Finance, the Minister of Religion) and act as advisers to the tsars. The Imperial Court

The Russian Empire is divided into twelve oblasts, or regions. Each oblast is governed by an imperial governor, who is hand-selected by the tsars. For a complete list of the Russian oblasts, see below.

The current Russian currency is the Ruble (also spelled Rouble). The current Russian average network income and growth revenue (as of 1745) is estimated at 5.2 billion Rubles (112 million British Schillings), making Russia the second richest nation in the world, only behind Great Britain.

Retrieved from "https://potcoplayers.fandom.com/wiki/Russian_Empire?oldid=644448"
Community content is available under CC-BY-SA unless otherwise noted.