Ryan started his EITC career as a hardcore fighter. He worked his way up, from back in the time when Lord Ben Costello left the throne unsupectedly to Benjamin MacMorgan. He now stands as the Chancellor of Trade for the glorious country of England. He resides in the guild with Prime Minister Johnanthan Goldtimbers, and King Johnanthan Breasly. He runs the guild when those two are not present and is on watch over a set of Marines.

Ryan was born on a small island just off the northeast coast of France, in the middle of the English Channel. He spent some time with a French family there and it was indeed the only family he ever knew as a child. When he was fourteen, his father showed him how to sail, and he has been doing so ever since. His father, Pierr'e and him were very close for the time, but that all eventually changed. When Ryan was ninteen, he helped a young rouge escape the clutches of the English Navy. Ryan found the girl a home on the base of his old island and they stayed there for a time. Victoria (the young rouge) was wanted by the navy for escaping from a prison, by bribing a guard. The two formed a special friendship that flourished from there.

After two years on the run, Victoria and Ryan had stopped in on a popular trading port in southeast Greenwich. As they were hanging around the main docks watching people come and go, Ryan saw a sight that would scar him for the rest of his life. A nearby Navy warship by the name of the HMS Nautilus sailed a flag with the names of the sailors, and the captain's name was written above them all. The captain, was none other than Pierr'e Lemiux, Ryan's father that he had lost contact with. With this horrifying discovery he grabbed Victoria's arm, and began to run, but they were stopped cold by a Navy Platoon. Unarmed at the moment, Ryan was forced to play the "My dad is your captain" card. And with that, the navy escorted the two young adults aboard the Nautilus

On board, quite contrary to his thinking, Ryan was warmly greeted by his father, who seemed unsure what to make of Victoria. There were wanted posters of Victoria ALL OVER the port, and so Ryan seemed to be confused as to why his father cared not that she was standing in his presence as a free woman. Eventually, Ryan and Pierr'e sailed off on the Nautilus with a full crew, and Victoria hiding in the hold.

After a good seven months of sailing, and getting to know each other well, Ryan and Victoria left Pierr'e in a Navy port in the caribbean appropriately named Port Royal. As they departed the ship with the rest of the crew, they took a look around, and as his father bid him farewell for a while, and stormed into the newly constructed Fort Charles, Ryan and Victoria settled into a house in the upper east side of the Town.

Three years past, and Ryan and Victoria were married, and had a son named Charles, and a daughter named Maria. Victoria, clear of her felonies against the navy, stayed at home alot to raise the twins while Ryan went to work two jobs. By day he was a dockworker on the main docks of Port Royal, but by night, he was a hitman for the biggest kingpin of crimes in the upper east side. Ryan of course was in here spying on the operations so that his father could devise a strategy to take out the hitmen. However things got worse before they got better.

On one of Ryan's more dramtic fake missions, he was ordered followed by a team of navy veterans, and officers. He was tasked with leading the thugs into a trap. All was going as planned, but it all went horribly wrong when he realized he forgot to tell Victoria that he was working a "double shift" at the docks, so Victoria began to worry. At this time she decided that the children would be fine if left alone for no more than ten minutes, so she put on her coat, and set out looking for Ryan. When she finally found him, and the navy crew she was horrified at the dead bodies of the thugs that had been apprehended. He assured her things were fine, but that promise was short lived, for at that moment the navy turned their guns on her

Ryan was infurriated when he found his wife locked away in a prison the next day. He gathered weapons from an old warehouse that his gang used for storage, and headed for the fort. He burst through the doors of the fort, and was immediately contained by navy guards. He was level headed and wise though, so he demanded to see his father. When he was thrown into his father's office, he was just about ready to stand up and strangle him.

"How dare you arrest my wife father!!??" he exclaimed. His father returned with a somehwat daunty excuse of "I am doing my job by brining in a wanted fugitive." "Father! I thought we had agreed that you would let Victoria go free?" Ryan pleaded. "I have set her free, but Lieutenant Blakely wanted her in, and I can not deny his orders." his father returned with a disgusted tone. Accusitions flew between the two and as the noise drew the attention of the outside guards, they retrieved Victoria from her cell, and brought her to the office, but by the time they got there, all was silent, and they entered the doorway they found nothing but Captain Lemiuex's dead body on the floor bleeding. As Victoria sobbed, a guard found a note attached to a bloody dagger stabbed into the desk. The note dictated some final regrets from Ryan:

I am sorry, but my being is needed elsewhere. if I stay here the navy will surely kill me, but they will leave you alone now that I am gone. Do not worry about me, only worry about yourselves. I have taken a surplus of food, and water for a long sail to wherever the waves take me. I failed you Victoria, I made you a promise that I couldn't keep. But that will not happen again. So I can promise you this; One day, when I am a free man, I will avenge you, find you, and save you all from the terrible life you live now. No matter how hard the times may get, just have faith in your hearts, for I will come back for you all.

With Every Dark, Comes a Light

After six years, Ryan had finally made a good name of himself as he had taken up a job as the lead information officer in an infamous pirate military guild by the name of The Pirate Republic. General Francis Rigswine (republic gm) had hired him, and forced him into battle after he disappeared, and the guild second in command went insane. Ryan bravely lead the biggest pirate military guild and they became notorious for being the first big organization to challenge the evil Co Empire. Aside from that, they were the force that won Tortuga for the pirates, and has kept it's freedom to this day. He allied himself with growing guilds like Skull's Marines, and The Order of the Nautilus (no ties to his father intended).

After a war that dragged on for several months, Blademonk was visited by MacMorgan, Lord Marshal of the EITC, and was presented with an offer. For his valliant war efforts, MacMorgan offered Blademonk a position as a marine in his army. As naieve as Ryan was at the time, he declined the offer, and Ben made a point of his power by totally assaulting, and destroying most of the Pirate Republic when the Fort Dundee arose on Padres. After some serious consideration, Ryan was captured along with his second in command and sent to a prison yard. Then, when MacMorgan visited him one last time, he took the chance he was presented, and stole a sword from a nearby sergeant, and struck down his former pirate accomplice with one lighting fast hit.

The Birth of a Killer

Ryan was rotated into the 20th marines under the direction of Captain Leon, two weeks after the incident. he was trained, and graduated from the academy along with some other famous names like Baron Monchousin, Captain Ryan, Logan Rustarrow, Billy Hullbatten, and many more. He served in the west part of caribbean security until he was discovered by Johnny Goldtimbers, and rotated in to serve Lord Marshal Samuel Redbeard. But when Samuel was discharged, Ryan was disoriented. He decided to serve Johnny. He found out soon though that there was a shift in the English government. Johnny had become the Prime Minister. And for a while, Ryan was his right hand man.

He was however, removed from his path of destruction because he became paranoid, and partially obsessed with war. Therefore he was reassigned to a top secret project where he was dispatched for several weeks (sometimes even months) at a time relentlessly spying, and reporting info on some of the biggest enemies of the EITC. Including, INFERNO, The Paradox, and Crazy Aces.

Today, Ryan has returned from retirement. The Caribbean has somewhat welcomed him back, but he has made many enemies over the years. Upon returning he was offered the position of Chancellor of Trade, by King John himself. Ryan took the position, and it still stands with him today.

He has unfortunately divorced Victoria due to a complication in the time that they had together. But he has gone and found one of his long time friends, Hannah Bluefeather. He has married her, and they now both engage in actions relevant to the newly formed joint governments of England, and Ireland.

Today Ryan serves within the EITC Military due to a lack of qualified leadership. He is a Colonel in the EITC Third Division and he commands a platoon that is currently under construction and will be expected to launch into combat in late Febuary. His government roles are not as heavily required as they were a short time ago when he created the now disbanded Wardog Squadron, and The Euro Union. "It's good to be back." said Ryan when asked what he thought about his return to the military after so many years. "I just hope the men are willing to cooperate this time." 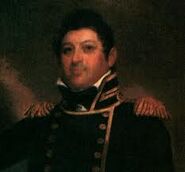 The Battle Of Telltalle Fortress (Won)

British Calvary riding into battle in the foothills of Afghanistan 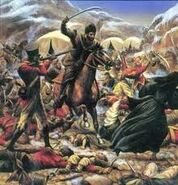 Ryan (Left) assisting his men at the Battle of the Eaglin Straights, Afghanistan
Add a photo to this gallery
Retrieved from "https://potcoplayers.fandom.com/wiki/Sir_Ryan_Blademonk?oldid=705563"
Community content is available under CC-BY-SA unless otherwise noted.