St. James Palace is the home and birthplace of Prince Edgar Wildrat of England. It was constructed only 10 years before Edgar was born. The palace was built in London and aside from being large and ornate also has a vast garden and forest. The palace is currently housing Matthew Blastshot who is recovering from his wounds in battle, King John Breasly who is accompanying him and of course, Prince Edgar Wildrat. The palace is vast and a wonderful place for royalty and other guests to eat, drink, socailize and meet other people. It is sometimes used in war time.

These are pictures of the palace itself and the interior:

The West end of The Palace

A view of the lake in front of the Palace 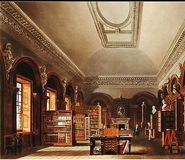 The large Library of St. James Palace with servants and butlers walking about. 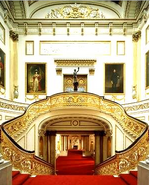 One of the side halls, with portraits of various royalty on the sides

The Sleeping Quarters of Edgar Wildrat

Another view of the outside of the palace

A fine view of the North Face of the palace.
==Residents==
*King John Breasly
*Prince Edgar Wildrat
*Lord Matthew Blastshot
Add a photo to this gallery

One of the most legendary parts of St. James Palace is the gardens. It also holds beautiful colored birds for Royalty.

People enjoying the public parts of the vast gardens

A outcropping of Garden overlooked by the palace itself.

There is also a lake in this Garden. Here is a picture of the lake.

A bridge connecting to parts of the Garden

Wildlife in the garden.
Add a photo to this gallery
Retrieved from "https://potcoplayers.fandom.com/wiki/St._James_Palace?oldid=713595"
Community content is available under CC-BY-SA unless otherwise noted.