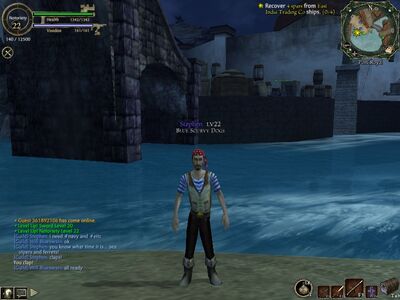 Stephen is the pirate of User:Stpehen

Stephen is level 36 unlimited access. His only weapons are sword, gun, doll, grenades staff and dagger.

He is a member of Skull's Marines

He has completed Raven's cove and taken the Spinecrest Sword! He also has green hair.

As a child he met a boy named Will Blueswain, they instantly became friends. A while later, they were captured by the Black Guard for pretending to be pirates. They were locked in jail with a salty pirate named Jack Sparrow. He freed them from jail and they escaped with Bo Beck. Then they met a mad skeleton named Jolly Roger, who promptly turned Bo Beck into a skeleton for betraying him. Jolly Roger sunk Bo Beck's ship with ghostly cannon balls, and they fled to Port Royal. They decided to borrow Will's Father's Light Sloop. With it, they sailed to Cuba, it was a long and grueling journey. They then met Tia Dalma after being nearly devoured by alligators.

Retrieved from "https://potcoplayers.fandom.com/wiki/Stephen?oldid=704682"
Community content is available under CC-BY-SA unless otherwise noted.