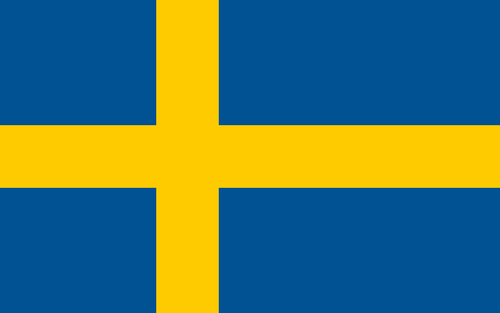 The Kingdom of Sweden (Konungariket Sverige) is a country in northern Europe. With a rich culture and impressive empire, Sweden dominates Scandinavia and holds several overseas territories. Almost all of the Nordic states - Norway, Iceland, Finland, and Sweden itself - are under Sweden's control.

Sweden is a constitutional monarchy with an active unicameral parliament, the Riksdag, based in Sweden's capital, Stockholm. The current head of state with limited authority over the Swedish Empire is Queen Elisabeth I of the house of Hesse. The queen's heir apparent to the crown is yet to be decided. The head of the legislature, serving as the center figure of the Riksdag is Prime Minister Karl Fredrik Garlandius.

In 1746, after her husband, King Albert I of Roumania abdicated, Queen Elisabeth I inherited the Roumanian throne, thus making her a joint-monarch.

The Kingdom of Sweden

The Kingdom of Sweden boasts one of the largest empires in northern Europe, at roughly 3,500,000 square kilometers. The following is a list of all countries / territories currently united under the Swedish crown:

The primary military force of Sweden is the Federation Army, consisting of regulars from all member countries. The Federation Army includes both the Navy and land forces and is commanded by the Grand Duke of Warfare.

While the main fighting force of Swedeb is the Federation Army, Sweden has its own elite force titled the Nordic Guard. The Nordic Guard is often sent as vanguards or special operations troops and are the best of the best in all of Scandinavia. The Guard is commanded only by the Chancellor himself.

Record of the Kingdom

1742: Throne of Sweden is passed down to Princess Elizabeth after the death of the former king; John Macbatten.

1743: Svalbard, Greenland and the Faroe Islands are colonized by Swedish Explorers under the Discovery Act.

1744: Declaration of war is signed toward the country of Spain.

1745: Olso, capitol of Norway is stormed on January 21, Norwegian War ends. Amadeus Kwagar is reinstated as Grand Duchy of Norway.

1745: Iceland cedes into Swedish control after take-over of Norway.

1745: Declaration of war is signed toward the country of Austria. HSS Humboltd, HSS Glockshord and HSS Minerva land 1st and 2nd Nordic Guard divisions in Pommerania but halt after orders of neutrality due to allied indecision.

1745: Nordaustlandet Prison opens in Svalbard for prisoners of the Norwegian War.

1745: Courland is annexed into Sweden.