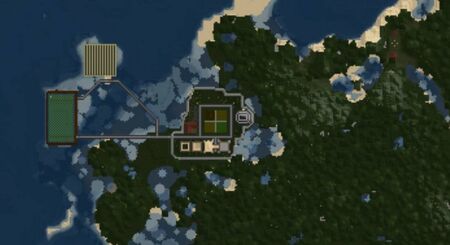 Tempus (now often referred to as the "original Tempus") was an island town on NeddehCraft 2.0 near the world border. It was founded on June 13, 2015, by Cannonwalker, who was also its mayor. It holds the unique distinction of being the first town established on the server, being made the night the server opened. It was attacked by The GWs and subsequently abandoned on June 28, just a couple weeks after its founding. Its inhabitants went on to found New Tempus after the collapse.

Tempus was founded on June 13, 2015, a few hours after the opening of the NeddehCraft server. Cannonwalker had known before the server was officially opened that he wanted a town near the world border. After the server opened, he recruited Beastdudez to be in the town with him; Beastdudez would gather resources while Cannonwalker found a place to settle.

At the end of the three-hour grace period, where no mobs spawned, Cannonwalker found an island a couple thousand blocks away from the world border. Beastdudez teleported with various mined goods, and the two began building their homes. Sometime later in the evening, hostile mobs (particularly Creepers) began spawning at peculiarly high rates. The two were unable to actually focus on building the town because Creeper explosions kept leaving large holes everywhere. After pestering Ned_Edgewalker, the server owner, about the ridiculously high spawn rates, Ned decreased them. Later that evening, Cannonwalker put a farm for crops where the explosions were before, since him and Beastdudez were on the brink of starvation. The next day, the two made animal pens for pigs and sheep they found on the island, the former of which were put underground to avoid Pigmen mutation due to lightning.

On June 16, after debating how to install security in the town, Cannonwalker and Beastdudez built a stone brick wall around the town, put torches along the wall, put gates at the road and built an Iron Golem within the walls to protect against any mobs that could spawn (the Golem was jokingly named "Edgar"). After taking these precautions, no mobs spawned within the town's boundaries, and only spiders could get in; the town was finally safe for its inhabitants. Cannonwalker would soon thereafter convert his house into a furnace room and make a new house.

On June 18, after NeddehCraft had officially installed a Herobrine plugin, Herobrine began targetting Cannonwalker. Beastdudez had disturbed one of his altars prior when Cannonwalker wasn't online, and Herobrine was angry. Herobrine gave Beastdudez a book with the coordinates to what he and Cannonwalker discovered was a cave he built containing a Nether Portal. Cannonwalker and Beastdudez entered, only to find the portal vanished behind them. They ran through the Nether to the replacement portal Herobrine built, barely surviving, causing Herobrine to give up temporarily and go back into retreat. After the Herobrine issue was resolved, the two built a sugar cane farm off the coast of the island.

Over the next three days, various odd happenings involving Herobrine occured; multiple times, Withers and/or Ender Dragons were spawned in Tempus, along with other mobs. While this was happening, Cannonwalker and Beastdudez had been going on quests with the information given to them in books by "Notch," telling them the locations of various overpowered "Relics" from Herobrine's childhood; the duo and Deviser__Gaines would get a bow ("Talon Cutter") and a chestplate ("Dragon Chestplate") from the first two quests. All of this eventually culminated in a fight with the Ender Dragon, a Wither, Ghasts, and various other mobs, all in the End, in which a sword was received ("Herobrine's Sword of Blight"). On the 19th, AwesomeA321 would join Tempus.

In the early hours of June 28, an attack by The GWs destroyed parts of Tempus. Cannonwalker protected most of the city's valuables with an underground obsidian bunker, but Cannonwalker and Beastdudez decided it would be best to abandon the city and make a new one to prevent future attacks. That day, New Tempus was founded.

Note: These are not like the rest of the rules and will not be enforced. However, it is in the best interest of anybody on the island to follow these to prevent unnecessary death/injury.

Beastdudez (left) and Cannonwalker (right) near their temporary camp, June 13

Beastdudez's (left) and Cannonwalker's (right) houses, with their farm, June 13