The Angler Lord is part human and part Anglerfish. While above the surface, he uses his cursed blades and awareness skills to hunt his prey in human form. While in water, he transforms into a giant Anglerfish and hunts his prey by using his bioluminescence string that hangs over his jaws, and attracts prey to his mouth. While on land, he created many different weapons, cursed by the ocean itself. 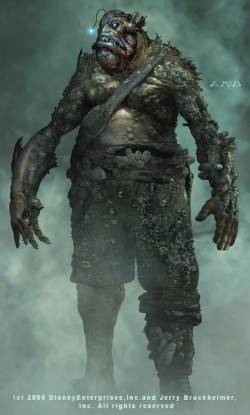 The Angler Lord was once a strong pirate. He had an advantage with blades, and had a strong hatred of other pirates. He was known for his greed, and his deadly skills. One day, a Navy Cadet, wanting to show off to the other cadets, stabbed Angler with a bayonet. The horrible pain made Angler so angry, he disobeyed the PIrate's Code, and shot the Cadet with a pistol. The other cadets ran, and Angler knew the pirate lords were after him. So he used his best voodoo powers to create a huge city, named Atlantis. Along with the city, he created hundreds of soldiers to live in it, and four sons to rule with. The most greedy of the sons, known as Mortis, had a strong hatred for Slappy, the most trusted son. Mortis became greedy, and turned Slappy into a ventriloquist dummy, and gave it to a man named Jamie. Suprisingly, The Angler Lord was proud of Mortis. After years of a peaceful city, volcanic activity under the sea destroyed the kingdom and brought it down. into the depths. The Angler Lord and his sons were cursed, and made half Anglerfish and given useful powers. They were then known as the Lophian Family. They hid the city, in an alternate universe. The way to access the city was to find three diamond keys, held by the sons,and navigate their way through the Atlantis Labyrinth.

Battle of the Atlantis Labyrinth

Erupt volcanoes and cause huge fires

Stop him and others from dying

Move objects without touching them

Adapt to any situation

Freeze and go back in time

Lost Sword of the Angler Lord

The Sword of the Forgotten Angler

Retrieved from "https://potcoplayers.fandom.com/wiki/The_Angler_Lord?oldid=704635"
Community content is available under CC-BY-SA unless otherwise noted.