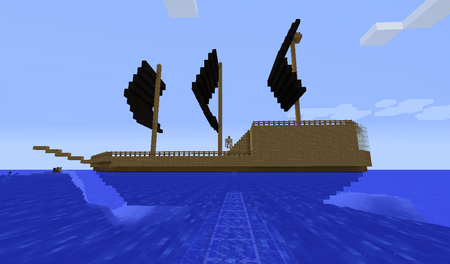 The Black Warrior was a ship built by Cannonwalker on the server GabeWorld.

Cannonwalker began construction on the Black Warrior during his first day playing on GabeWorld. He made a long dirt path away from mainland and made a wooden frame. Then, after much grueling work over the next few days (although this was heavily alleviated with the help of an admin called "Kazuma") the ship itself was complete. Later on, Cannonwalker would build the masts and AwesomeA321 would help with the sails.

Although the ship was originally only going to serve as Cannonwalker's home and his nether wart farm (as a source of income), the formation of Team Piston brought upon it another task; serving as Team Piston's oceanic headquarters. With this change in purpose AwesomeA321, Captain_Naughty and BaronVonShush would become crew member (at least to some extent) on board the ship. However, GabeWorld was closed down sometime in May 2014 and along with it the ship went.

Retrieved from "https://potcoplayers.fandom.com/wiki/The_Black_Warrior_(Minecraft)?oldid=708233"
Community content is available under CC-BY-SA unless otherwise noted.