Many address undead monsters created by Jolly Roger as "Soullesses". These poor creatures who were formerly humans work for Jolly Roger. Sometimes Jolly get's the "luck" of someone escaping his clutches right after being captured. They are cursed until they die with the disability to sleep no matter how hard they try, having no feelings or love to any mortals, and no possible way to die, except Jolly Roger killing you. He wants to be the one who kills you so he can own your soul. Also when you're half soulless, you're easily tracked down by Jolly Roger because he has a 6th sense of his targets.

Unfortunately for ol' Jolly, the half-soullesses created an armada that conquered a country, so Jolly Roger would have to prevail over a large portion of the Caribbean to manage to overpower them. Obviously, the half-soullesses aren't always ghosts, they morph when they feel a shot of adrenaline, are in danger of dying, or they can involuntarily morph if they want to. The color depends on the mood. For example: blue = sad or content, green = content, orange = fighting, red = dangerously mad. 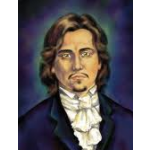