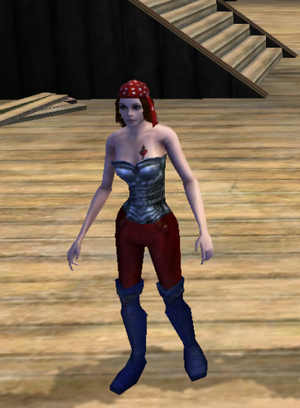 Emily Navigare is a pirate who worked on the G.O.P.S. Leviathan during the time of Captain Cruenta Mors Persoluta. She was there in the attack on the Mors Armada in the Battle of the Second Maelstrom. 5 years after the battle, she and her sweet heart, Charles Walsh, got married and had 2 kids, Samuel Sharp Walsh (named after the old captain of the Leviathan), and Marie Sandra Walsh (Named after Charles' mother). You can read more in The Journey of the Leviathan.

Retrieved from "https://potcoplayers.fandom.com/wiki/The_Journey_of_the_Leviathan/Emily_Navigare?oldid=704393"
Community content is available under CC-BY-SA unless otherwise noted.