This is the Government of China page. 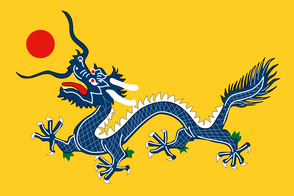 We are hiring able men and women to fill government and army positions, please sign up in the comments.

Origin of the name

Both in honor of the earlier Jurchen Jin dynasty in the 12-13th century and his Aisin Gioro clan (Aisin being the Manchu for the Chinese 金 (jīn, "gold")) Nurhachi originally named his state the Great Jin (lit "Gold") dynasty, afterwards called the Later Jin Dynasty by historians. His son Hong Taiji renamed the dynasty Great Qing (lit "Clarity") in 1636. The name "Qing" was selected in reaction to the name of the Ming Dynasty (明) which consists of the characters for "sun" (日) and "moon" (月), both associated with the fire element. The character Qing (清) is composed of "water" (氵) and "azure" (青), both associated with the water element. This association would explain the Qing conquest through defeat of fire by water. The water imagery of the new name may also have had Buddhist overtones of perspicacity and enlightenment and connections with the Bodhisattva Manjusri.

The state was known internationally as China, or the Chinese Empire and considered to comprise China proper or the Eighteen provinces, Chinese Tartary, Chinese Turkestan, and Tibet. It was also known in the romanization of the time as the Ta Tsing Empire from the Chinese for "Empire of the Great Qing" (大清帝国, p Dà Qīng Dìguó)

Chinese Physical Map
Add a photo to this gallery
Retrieved from "https://potcoplayers.fandom.com/wiki/The_Qing_Dynasty_Government?oldid=723167"
Community content is available under CC-BY-SA unless otherwise noted.