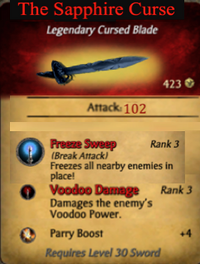 In the Mystical Realm. The Frozen Dimension became disrupted following the advent of the Dark Citadel and shot out a chunk of it into a portal that landed North of the Caribbean, The Society Of Light now monitoring anomolies reported this to Bill Plunderbones , who took Richard Goldvane and The Godhermit with him using the Famous Green Runner,

They travelled North beyond the barriers of The Caribbean and eventually ran into a supernatural storm generated by the disruption of the Realm Field, The waves pounded the ship's hull and made it land at the new Icy Island, with a ice spike scracthing a deep cut in the bow of the ship. The trio while being battered by supernatural winds and ice storms searched the island when they fell into a cavern, there they discovered sword like ice spikes in the ground. They pried them out and the spikes shaped into crystal like blades but with a blusih coloring. They left just as another portal in form of a whirlpool opened under it and swallowed the island back into the Realm. The Blades were taken to Daggerpaine Industries to be studied and three main ones were claimed by the Trio, while rest are still in DI.

Retrieved from "https://potcoplayers.fandom.com/wiki/The_Sapphire_Curse?oldid=720378"
Community content is available under CC-BY-SA unless otherwise noted.