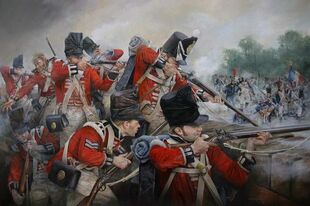 The Elite of The Regiment

Light Companies are designed to be able to go to the places where normal infantry just cant get to, they Are normally the first to go into a Escalade, They are known as the elite of the Army and as of such have been given many crude nicknames by their Normal Infantry counterparts such as 'Glory Boys' 'Toy Soldiers' And 'Coaleastern's Fair-haired Boys'

But the Light Company troops take a perverse pride in this and they always say that other infantry companies just can't handle the heat of battle like they can. The Light Company's are always Important and have reputation as the heroes of the hour. they pretty much rock!

Commanded by Captain Richard Venables and posted currently in the City of Alexandria in Egypt. They are a company of hardened veterans who have seen battle before and are competent Fighters.

They are very strict about their Drill and Appearance and when they aren't Training Or Polishing their Boots, They can be seen Hunting practising their aiming and reload speed.

The Company in Battle

The Storming Of Tortuga

The Company Marches into battle!

Major Venables
Add a photo to this gallery
Retrieved from "https://potcoplayers.fandom.com/wiki/The_Twenty_First_Regiments_Light_Company?oldid=753119"
Community content is available under CC-BY-SA unless otherwise noted.