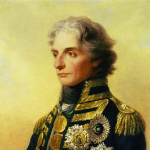 I am First General of the Royal British Marines Johnathan Francis Anthony O' Reilly, or just Johnny Coaleaston. I first joined the game in 2008 as Edward Coaleaston, in early January, but unfortunately, as I was a basic access member at the time, never became a founder. I played for about a year in the changing East India Trading Company roleplay guilds, and then went into a period some players call "The Dark Ages" or inactiveness. When I decided to return in March, 2009, I had forgotten my account name and password. I decided to continue the Coaleaston legacy, and name myself Johnny Coaleaston. I have played on him ever since. I am currently a level 49 in notoriety, and the husband of my loving wife, Princess Amelia Elenaor Augustus, or just Emily Mcsteel. I am the guildmaster of the guild The King's Marines, as it only fits to my position as Head of the Royal Marines. I hold many other positions and titles, which I have listed below. I am also author of the currently growing series of books called The O' Reilly Series, and have started on The O' Reilly Series: Book One and The O' Reilly Series: Book Two, the story of my life in POTCO.

Where to Find Me

Aye, I may be an intense roleplayer, but I am still an active Wikian, and will be glad to help any newcomers to the Wiki in any ways possible. If anything, I can help you make page banners, and just simply navigate the Wiki. If you wish to contact me, find me on User talk:Johnny Coaleaston, or if you wish to send me a private message, send an email to johnnycoaleaston@aol.com, and I will be glad to help you with anything you need.

Retrieved from "https://potcoplayers.fandom.com/wiki/User:Johnny_Coaleaston?oldid=747954"
Community content is available under CC-BY-SA unless otherwise noted.