As far as PotCO is concerned, I was originally Richard Cannonwalker, Guildmaster of Pirate Torrture and The New Brood, who existed from November 21st, 2007 to September 2009 due to the account being terminated. Afterwards, I made another Richard Cannonwalker and went on to be Guildmaster of The Cabinet, The Genesis, and finally The Outlanders. In terms of Roleplay, I also held the prestigious title of Pirate King of the 8th Brethren Court before the game's end.

As of now, I play on Minecraft under the name Cannonwalker. You can read about my adventures here.

All of my Stories

A list of every story i've ever written: the game the story is based on is written in parenthesis next to it, along with any other important information. Those stories which are unfinished will be marked in italics

Throughout my years as a pirate, i've had many memories. I was smart enough to capture some of them in the form of screenshots, however, and present them here for you to look back on as I do.

My first day in Vaccine vs Viruses

Me hanging out with some friends in mid-2009

Smile for the camera, Simon...

Me coin-flipping with Stefan and Simon, loyal guildmates, in 2009

Jeffrey Callegrim and I in 2009

My long-time first mate Stefan and I

Some guildies and I after recovering the Black Pearl

A friend and I on Outcast Isle

Guildies and I at Devil Root

An odd friend and I

Me being embarrassed by Foulberto

Some friends and I on St. Patrick's Day

"What do you want for Christmas, little boy?"

Revenge of the Midgets

I'm pretty sure this wasn't even around Christmas time...

Me after drinking a potion 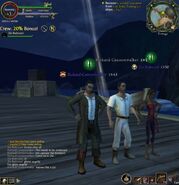 Jon and I hanging out at the tavern

Ranked #4
on this wiki