Pirates know full well that Friday the 13th is the unluckiest day of the year – and this year we face no less than three. Never one to miss a chance for troublemaking, Jolly Roger means to use this bad-luck weekend to his good advantage. Curses fly all weekend, starting this Friday the 13th, when Jolly unleashes his Curse of the Muertos Moon. Any Pirate on land and outdoors that is struck by the cursed moonlight transforms into one of Jolly’s undead minions. Beware those skeletal Pirates seeking to do battle under Jolly Roger’s blight - or shatter his spell by defeating them.

Seeking safety from the vile hex by putting out to sea? Ye may just sail straight into Jolly’s trap, as he’s ordered increased patrols of Ghost Ships all weekend during the Curse. 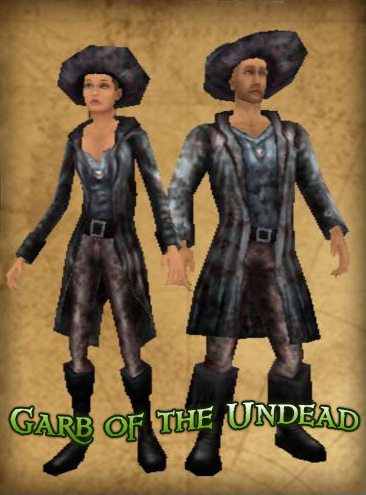 We Pirates make our own fortune, and wearing the Garb of the Undead may be yer lucky charm.

Peddlers bring back Pirates' favorite gear for a limited time starting today – now including the tattered coat for lady Pirates!

An unlucky turn may many times bring plunder to those brave enough to weather the storm...

Retrieved from "https://potcoplayers.fandom.com/wiki/User_blog:Jack_Pistol/Friday_the_13th_Strikes_Again?oldid=519412"
Community content is available under CC-BY-SA unless otherwise noted.