Sadly, because of his recent behavior, it has been decided that Lord Marshal Samuel Harrington will be receiving an infinite ban. It was decided that this was to be his last chance and he just blew it.

I was moderating chat but playing the game at the same time, so I was not actively engaging in the chatting. I checked up and saw that a lot of swearing, insulting and religious talk was going on in chat. I told everyone to stop and for a short while they did and so then it started up again, mainly headed by Samuel.

I was about to enter a PvP and new I needed to make sure that things were still all right, so I checked in and said "I am going to do a PvP, when I return in 5 minutes I don't want to see a single thing against the rules below this line. No more insults or bashing religions." Right after I said that and returned to the game Samuel said "Let's continue talking about religion." He then said "WTF" and "Muslims suck." with a Muslim user present. I returned the second after I sent PvP invite and banned him from chat immediately.

After the PvP was done I returned to try and clear things up and set things straight. Soon after I returned a new user, Mort Pennygrabber, entered chat. Funny enough, this new account was made right after I kickbanned Samuel and he made a joke about Jews using that name earlier. He was kickbanned for not having enough edits and then I infinitely banned him, knowing it was Samuel.

The mods and admins present convened in a private Group PM to discuss the situation. It was discovered that Samuel has been banned from chat for the 3rd time this month and that he already had 1 wiki strike. A decision was made that he would be infinitely banned. 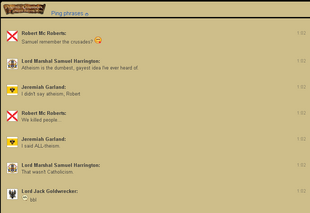 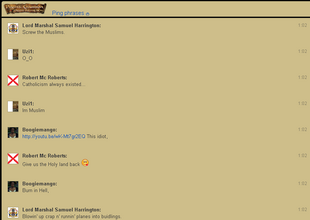 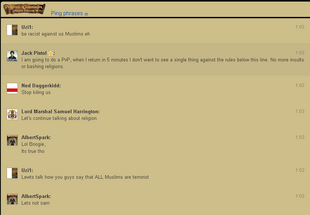 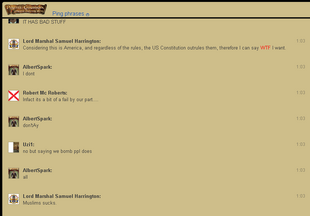 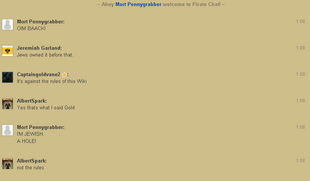 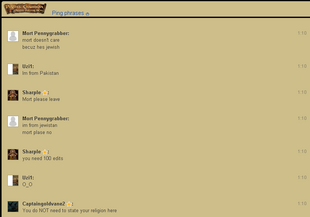